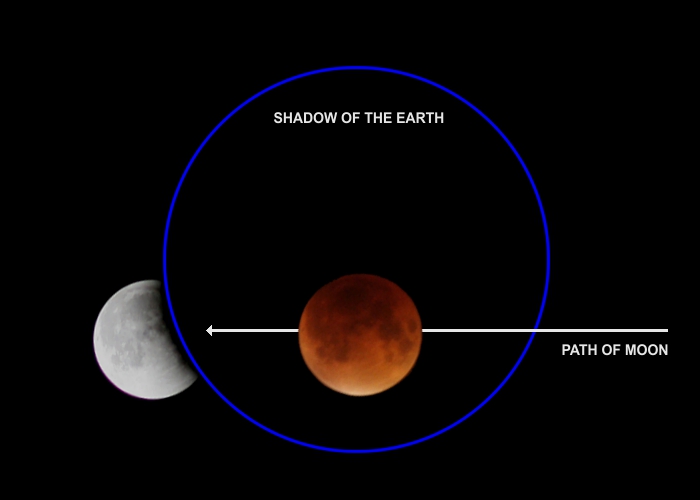 I wrote about the Sep 27/28 2015 Super Harvest Moon total eclipse back in my Sep 21 post, and of course was set up and ready to get a photo of the event hours ahead of time. Adding to the drama was a predicted moonrise (already well into the partial eclipse phase) directly over Gavilan Peak as seen from my east yard. The thumbnail below shows a screen capture from Cartes du Ciel (CDC), my digital planetarium app. The location and height of that mountain, along with equivalent data for all 360° of horizon surrounding me, was entered into CDC about a week before the eclipse. Click to enlarge. 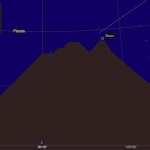 Alas, it seems my horizon data was a little off. The predicted moonrise at 19:49 MST actually happened about 30 minutes earlier, and by the time I went out to start taking photos, the Moon was well above the mountain. It wasn’t the fault of CDC. That horizon data was measured using a surveyor’s transit many years ago, but from a different location than where I had my camera set up that evening. I assumed it would be close enough. I knew there was going to be some parallax shift with that mountain less than 0.5 km (0.4 miles) away, but I clearly underestimated the amount of shift.

Additional difficulties were encountered with some high thin cirrus clouds. I couldn’t see them with my eyes, but they smeared out the details on the lunar surface. None of my photos were good enough to display full size. But I was able to incorporate two of them into the composite graphic at the top, salvaging enough from the fiasco to create this post.

That graphic shows the path of the eclipsing Moon through Earth’s shadow in space. The geometry of the shadow shown in my Sep 21 post was not to scale (NTS). Since the Sun is larger than the Earth, Earth’s umbral shadow is actually a steep cone with a vertex angle of 0.5°. It converges to a point some 1,400,000 km (870,000 miles) from Earth. That’s about 3.5 times the distance to the Moon.

When the Moon passes through that shadow it sometimes goes right through the center, resulting in a very dark eclipse. But when it goes through off-center, as it did on Sep 27/28, one side of the Moon will appear brighter. You can see that effect in the graphic, which uses actual photos of the eclipse as insets.

The other photo was taken as the Moon was exiting the Earth’s shadow (blue circle). At the distance of the Moon, that shadow is 3-4 times the diameter of the Moon. How long the eclipse lasts is determined by the Moon’s path (geometrically some chord of a circle) through that shadow. For this eclipse, the time of totality was 01:12. That’s about average.

The length of the eclipse also depends on where the Moon is in its elliptical orbit. This was a Super Moon, so it was near perigee (closest point to Earth). That means it appeared 14% larger than its minimum, so more shadow is needed to cover its disk. But at perigee the Moon is moving faster — 1.076 km/s compared to 0.964 km/s at apogee. Both factors make for shorter eclipses.

Next Week in Skylights ⇒ Triple Conjunction in the Morning