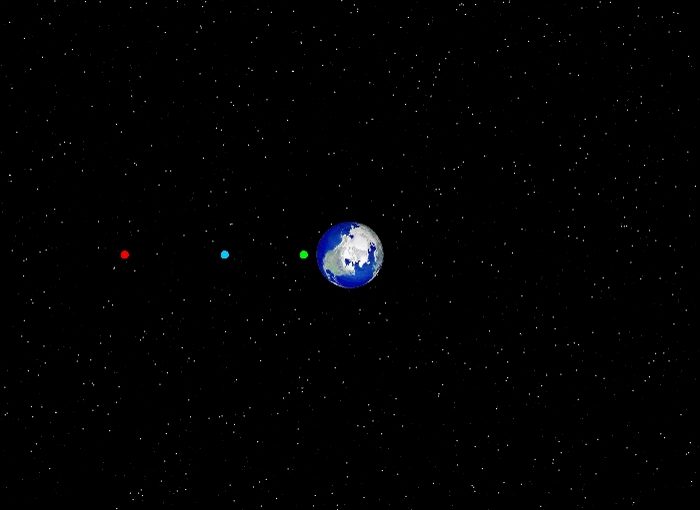 Question: I was up on my roof checking my satellite TV dish yesterday, and a question came to mind. The dish always points at the same place in the sky, but I thought satellites went around the Earth in an orbit. So I wonder, how can the dish always be pointing at the satellite without tracking its motion?   — AC, Colombo, Sri Lanka

Answer: Good question. Satellites do indeed orbit the Earth, but the time it takes them to complete one orbit is a function of their altitude. It might seem counter-intuitive, but the higher a satellite orbits the slower it needs to go. For a good explanation of the physics behind that fact, see my May 6, 2013 post: How the Space Station Stays in Orbit.

This orbit is called geosynchronous or geostationary. Note how the green dot stays above the same spot on the rotating Earth. This is why your satellite dish can stay pointed at the same location in the sky. Geosynchronous orbit is prime “real estate” for telecommunication satellites, and it’s already crowded with hundreds of them. Their average spacing is 73 km (44 miles). See the total inventory here.

Note that the view in the animation is looking down over Earth’s North Pole, and the orbits are all in the plane of Earth’s equator. Non-equatorial geosynchronous orbits are possible, but they are not geostationary — they appear to oscillate north and south of a fixed point in the sky and would not work well with a fixed receiving antenna. Note also that the animation is not to scale. Geosynchronous orbit is actually about 5.4 Earth-radii above the Earth’s surface.

Orbits at that high an altitude are fairly stable, but many of those satellites have small thrusters to adjust their positions as needed. The idea of using this special orbit for communication satellites was first proposed by Arthur C. Clarke in 1945, and these orbits are still occasionally referred to as “Clarke orbits.”

I should also note that the global positioning satellites (GPS) we have come to rely on so heavily are in a much lower orbit at R = 20,000 km (13,000 miles). So they appear to move through the sky relative to a point on the ground. At any time, however, there are enough of them overhead to provide navigational data. Currently, there are 31 GPS satellites in that orbit.

Next Week in Skylights ⇒ The Longest Moonrise