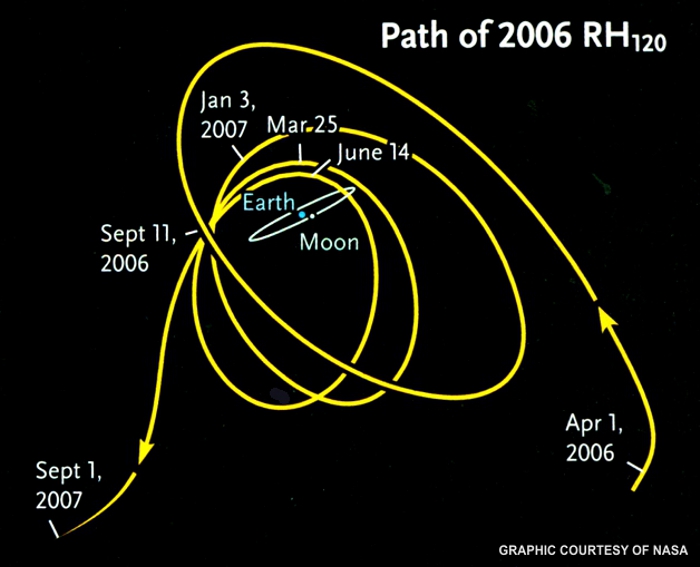 Question: I’m just starting to learn about astronomy and have a question. I’ve heard about new moons being discovered around other planets, so how do we know Earth only has one moon? — JV, Nantes, France

Answer: That’s a very interesting question. Obviously, we’ve known about the Moon (aka “Luna”) for ages, but does Earth have any other moons? The short answer is: We don’t know. The long answer is somewhat complicated, since it really comes down to what you mean by “moon.”

Here’s the problem. The International Astronomical Union (IAU), which decides on the definitions of astronomical terms, does not have an official definition of “moon.” Still, there’s a few things astronomers generally agree on:

Beyond that, there’s a lot of room for personal opinion. For example:

Having noted this uncertainty in the definition of “moon,” I’m now prepared to provide the long answer.

Turns out Earth has several dozen natural satellites capable of being spotted telescopically at any given time. They’re not in “permanent” orbits, like the Moon. Rather, they hang around for a few years, make a few erratic loops, then fly off into interplanetary space. The graphic at top shows the path of one such object known as 2006 RH120. This object was approximately 3 meters in diameter, hung around for over a year, and could be seen by large telescopes.

The question of “how long they need to hang around” is interesting. It gets into what is called “The 3-Body Problem” in physics. When you have only two bodies, say the Earth and Moon, you can easily predict (or retrodict) where they will be at any point in time. But when you throw in a third body, the equations become unsolvable in most cases. You can get rough numerical approximations, but they’re only accurate for limited periods of time into the future or past.

The problem with most 3-body systems is that they’re extremely sensitive to slight perturbations, so one of the three (usually the smallest) will eventually get “kicked out” of the system. And that’s what always happens to these mini-moons. It also explains why the “orbit” of 2006 RH120 (or any other mini-moon) is so chaotic. There are some 3-body systems that will remain stable, but they’re the exception rather than the rule. See this article for more about those exceptions.

Then how, you may ask, can multi-body systems (Pluto, Charon, Nix, Hydra, Kerberos, Styx) exist? Or for that matter, Jupiter with its 67 moons? Or our Sun, with it’s eight planets? First, if one of the bodies is very massive compared to its satellites, that stabilizes the entire system. Second, if all the bodies in the system formed from the same debris cloud, then the bodies settled into stable positions based on orbital resonances or gravitational “sinkholes.” In contrast, Earth’s mini-moons come from far outside the Earth-Moon system and arrive with random speeds and trajectories.

I should note that the Pluto 6-body system is still being analyzed. It’s entirely possible that any of the four smallest moons (diameters 10-50 km) could be temporary residents. An orbital resonance has been identified linking Styx, Nix, and Hydra gravitationally, but curiously, Nix and Hydra are tumbling chaotically in their orbits.

So the long answer to your question has to be: We know Earth has one moon for sure, but it might have more. The exact number depends on how you define “moon.”

Next Week in Sky Lights ⇒ Sunset in the East

Q&A: What Happens When a Meteor Hits the ISS
Sunset in the East
HOME