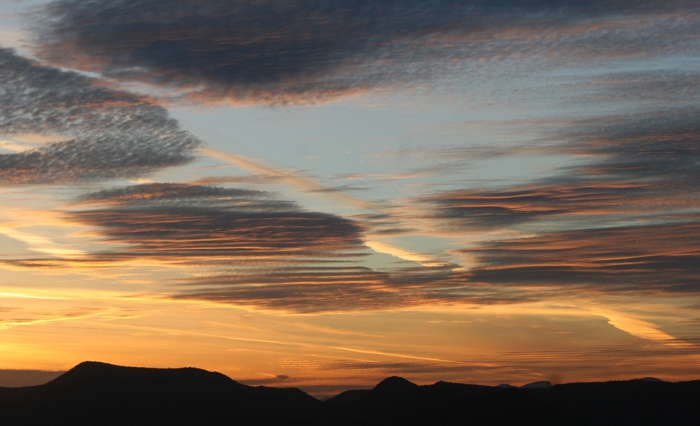 If you read last week’s preview, and didn’t look up the term, you might have been expecting to hear about how I captured some type of flying snake or lizard. We’ve got lots of snakes and lizards here in Arizona, but thankfully none of them fly.

Altostratus undulatis is a not-often-seen type of cloud formation. I wouldn’t say they’re “rare,” but they never last for long. So unless you’re a cloud-watcher like me, always out on the deck enjoying the sunsets, they can be easy to miss.

These clouds are commonly known as billow clouds, wind-row clouds, or wave clouds. The photo above was shot just after sunset on February 19, 2015. The “layers” are actually “rows” of clouds stretching off into the distance. The perspective makes them look vertically stacked. Click on it to open a larger image and you’ll see a lot more detail.

A Google image search reveals hundreds of photos of altostratus undulatis, all unique, but all sharing those characteristic rows of clouds. Take a look at some of the beautiful examples here.

The name altostratus undulatis is a combination of two meteorological terms. Altostratus refers to a layer of clouds at mid-altitudes (as opposed to cirrostratus which form at higher altitudes). Undulatis is from the Latin unda meaning wave.

The undulations are formed by gravity waves in the atmosphere. Not to be confused with gravitational waves (a prediction of general relativity), these are very much like the waves you see in water. But instead of a water surface moving up and down, this is a layer of stratified air that contains enough moisture to be very close to its dew point (the temperature at which invisible water vapor condenses into clouds). As the waves carry the air to a higher altitude, temperature drops and clouds form. As the waves carry the clouds back down into warmer air, the water re-evaporates.

What usually starts the waves is air flowing over mountains, and there’s lots of mountains west of me. You can see some of them in silhouette at the bottom of my photo. The air is forced up over a mountain range by prevailing winds, overshoots, and comes back down, overshooting again to a lower level. The process repeats, and this initiates the wave. It’s a fight between the buoyancy of the air and the weight of the air, hence the term gravity wave. The rows of clouds are thus perpendicular to the direction of air flow. There’s a nice explanation of the process, with diagrams, here.

These waves can occur anytime air flows smoothly over a mountain range, but most of the time the waves are invisible. What makes the altostratus undulatis appear is just the right combination of temperatures and water vapor. That’s why they never persist for very long. As the temperature rises during the day, and falls after sunset, the delicate balance required for altostratus undulatis is disrupted. The clouds will either disappear entirely, or merge to form the more-common continuous layer of altostratus.

Q&A: Which Direction is Up
Fallstreak Holes
HOME