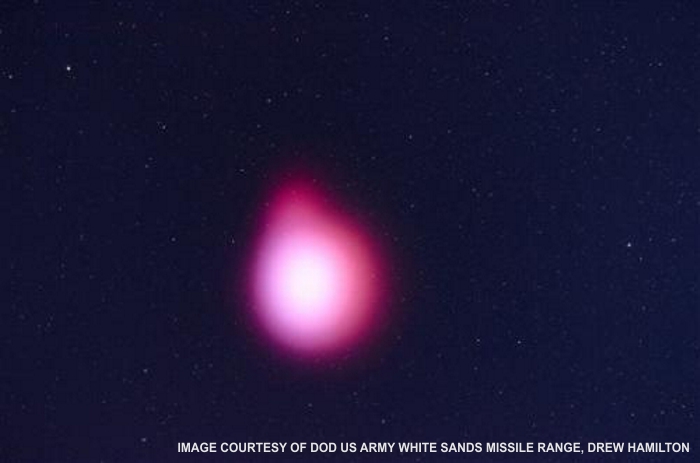 Question: We saw a strange blob of light in the sky last night (3/12/15) from Sherwin Meadows near Mammoth Lakes. Our intention was to try spotting Comet Lovejoy using our 10×42 binoculars. Then, around 9:15 pm PDT, just west of Jupiter, we saw this thing appear. It was only a small smudge at first, about the size of the Orion Nebula. But it slowly expanded, dimming as it grew, to a size considerably larger than the Full Moon. Its color was whitish-grayish. As we watched it move past Jupiter from west to east, we noted that it didn’t move nearly as fast as the ISS. And through the binoculars, we could see a tiny pinpoint of light near its center, almost like how a satellite appears.

My husband Bob found this image online showing what is called a “fuel dump” from an Atlas rocket launched on March 12. What we saw looked sort of like that, at least at the beginning, except for the color. And my sister found this image of a strange cloud seen in the sky from many parts of the US on March 12. The color is pretty close, but the shape is wrong. Do you have any clues about what we might have seen that night? — CC, Seattle, WA

Answer: Yes, there are two possible explanations for what you saw. Your detailed visual description helped me eliminate several other possibilities. You and your husband are obviously experienced observers, and that makes my task easier.

My two best guesses, in order of likelihood, are that what you saw was either:

Guess 1: What you saw was the result of a launch from White Sands Missile Range (WSMR) in New Mexico. Rockets are often used to test electromagnetic properties of the upper atmosphere by releasing a cloud of ionized gas. It’s important to understand these properties, since natural ionization at high altitudes can cause delays in GPS signals. Those delays can generate GPS location errors anywhere from a few meters to 40-50 meters.

The image above shows a cloud of gas released from a NASA Terrier-Black Brant research rocket. The gas was expelled into the near-vacuum of space just minutes after it launched. That happened on Wednesday, Feb. 25, 2015, so the date doesn’t match. Still, it’s a good example of how these tests appear. The color doesn’t match either, but the color depends on the types of gases released. In this test, the gases were trimethyl aluminum and lithium vapor.

So I checked my digital planetarium software. It verified that, at 9:15 PDT on March 12, as seen from Mammoth Lakes, Jupiter was near azimuth 132° (southeast) and elevation 62° (about 2/3 of the way from horizon to zenith).

Then I checked Google Earth. It told me from Mammoth Lakes, the azimuth to WSMR is 110° — close enough to 132°. Rockets are rarely fired vertically straight upward — there’s almost always some lateral motion. The 1250 km (777 miles) distance between Mammoth Lakes and WSMR didn’t bother me either, since I’ve seen and recorded launches from Vandenberg AFB in California, 800 km west of my location. I’ve also seen two launches from WSMR, 550 km to the east.

Whether something like this is visible at all depends on several factors:

I should note that Cape Canaveral is at azimuth 95° from Mammoth Lakes, close enough to be a contender. However, the distance is 3700 km (2400 miles). That would put a 100 km altitude launch well below the Mammoth Lakes horizon. That’s why my first guess was a WSMR launch. As you’ll see next week, I was wrong. Guess 2 was the correct answer.

I’ve often said that whatever you see in the sky, there’s always an explanation for it — or at least a reasonably viable scientific hypothesis. We’ve already done some science in this post, and we’ll need to do some more before we have the answer to your question. But nobody likes cliff-hangers, so I’ll provide the answer now. What you saw was the result of a two-stage rocket launch from Cape Canaveral. You can see the launch announcement here. I’ll explain next week how I determined this, but it will require a little more science.