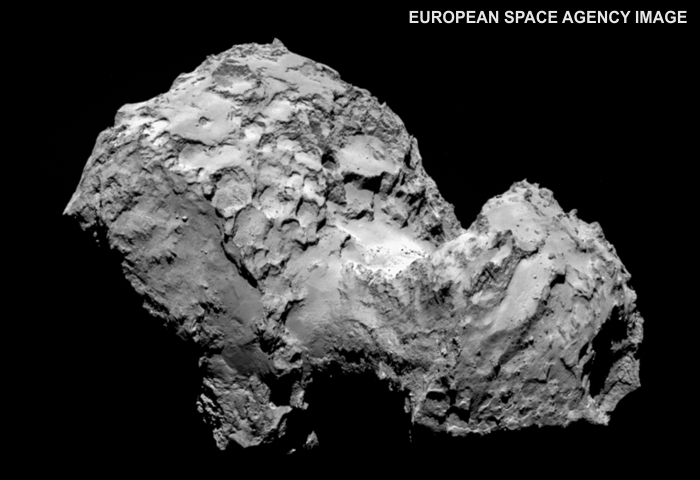 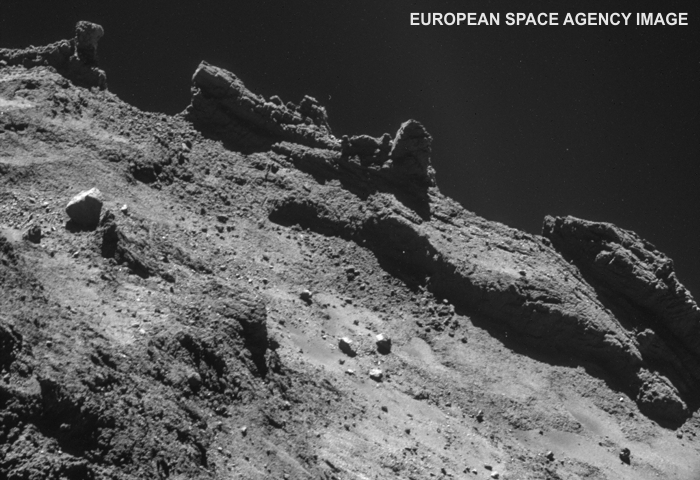 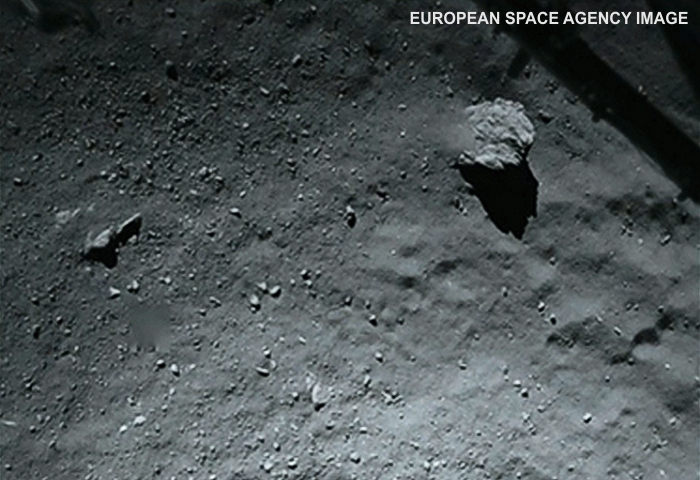 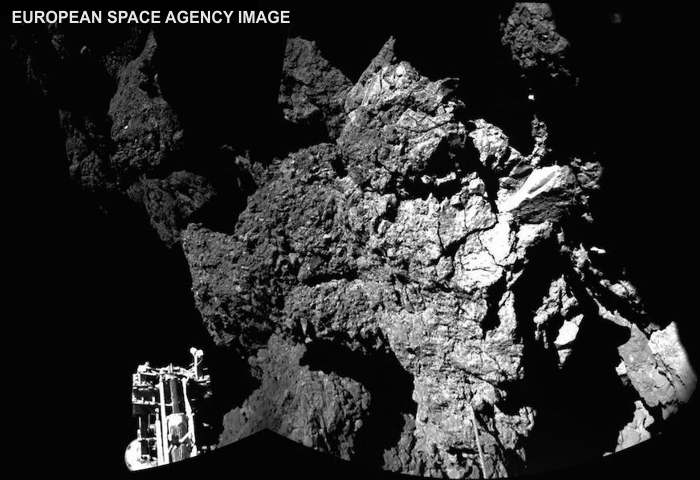 Diligent readers will note that last week’s “Next Week in Sky Lights” is not this week’s Sky Lights. Sometimes I have to interrupt my planned sequence of posts, as I did for the Chelyabinsk impact back in February 2013. In this case, it was the remarkable landing on comet 67P/Churyumov–Gerasimenko by the European Space Agency (ESA).

On November 12, 2014, at 16:08 UTC, the ESA probe Philae touched down on 67P. It was the first ever landing on a comet. Philae was dropped from the Rosetta spacecraft, which remains in orbit around 67P. I watched the live feed from ESA online. It was an experience much like watching the Apollo 11 Moon landing in 1969.

Sure, it was just a robot instead of a human. But it ranked with the other “great leaps for mankind” in the history of space exploration: Apollo, Viking, Voyager, HST, ISS. Rosetta was launched by the ESA in 2004. Since then, it has traveled over 6.4 billion km, using three gravity assists from Earth, and one from Mars. You can see an animation of that process here. Rosetta achieved a speed of over 18 km/s (40,000 mph), allowing it to catch up to 67P, and enter into a close orbit about 15 km above the comet’s surface.

You can follow a live update of mission parameters here.

The slide show above features 4 views of 67P, two each by Rosetta and Philae. It’s not the first time we’ve gotten photos of a comet, but these are the best and closest images ever obtained — including one image from the surface of the comet. They confirm what has long been suspected: Comets are loosely held aggregates of dust, ice, and rock. Gravity is so weak on these small bodies they can barely hold themselves together. 67P is a mere 4 km x 4.5 km in size.

In fact, after dropping in free fall to the surface from an altitude of 15 km (a journey that took 7 hours), it struck the surface with a speed of only 1-2 meters per second (3.5 mph). To keep it from bouncing back off the surface, Philae’s landing gear included shock absorbers and had augers to securely grip the surface.

It was also supposed to fire “harpoons” to provide additional anchoring, and use a top-mounted thruster to help push it into the surface, but those systems misfired. So Philae bounced, at least once, maybe twice, and finally came to rest in a less-than-ideal location where its solar panels (the only source of electricity to charge its batteries) were partly shaded by outcroppings on the surface. This will hamper some mission objectives, but science can still be done.

That science includes drilling into the comet’s surface and sampling for materials like water, hydrocarbons, and possible organic precursor compounds. The comet contains very old materials, essentially unchanged from the early days of our solar system, and can teach us much about what the solar system was like billions of years ago. Planetary scientists suspect the bulk of Earth’s water supply was delivered by ancient comet impacts.

67P is still beyond the orbit of Mars. The science will continue as 67P approaches the Sun, becomes more active from solar heating, and develops a coma and tail. Congratulations to the ESA for achieving this difficult and unprecedented feat. As data comes in, we will likely learn more about comets than we have since the invention of the telescope. These are exciting times for planetary scientists.

Next Week in Sky Lights ⇒ Star Hopping to Neptune

Q&A: Why Clouds Have Colors
Star Hopping to Neptune
HOME