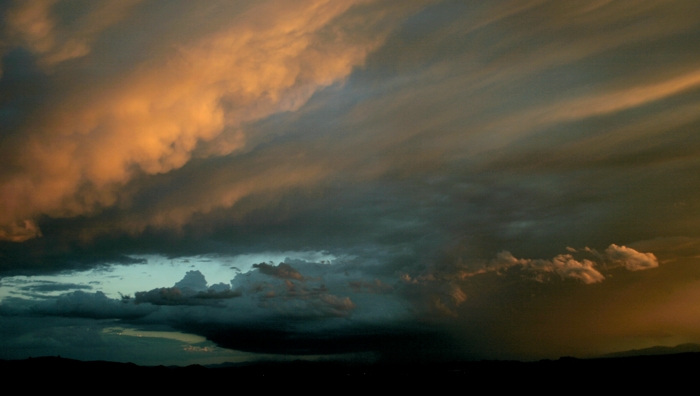 Question: Normally, when I see clouds in the sky, they’re mostly kind of a white color. But every now and then, I see other colors of clouds. What makes those other colors happen? — WG, Houston, TX

Answer: The colors you ask about can come from a variety of optical effects. I’m afraid there’s no single answer to your question. But to start with, you must recognize two important facts. First, the light from the Sun is basically “white” and thus contains all colors of the spectrum in its palette. Second, the water droplets that make up clouds are large enough to reflect (or scatter) all those colors. See my June 24, 2013 post for more on that.

The photo above shows many colors: red, orange, yellow, salmon, blue, black, and a touch of green. Over my many years of cloud-watching, I’ve seen pretty much every color in the book. This photo was taken around sunset, which explains the complex mix of colors. Some of those colors (red, orange, yellow, salmon) are the result of clouds being illuminated by that typical “sunset mix” explained in my July 1, 2011 post. It’s an atmospheric filtering effect.

Green clouds happen for a similar reason, but green is such a small component of the overall solar spectrum that the conditions have to be perfect. Green clouds never last too long, and they’re fairly rare to start with, but that green light gets scattered by air particles (N2 molecules, primarily) and can light up a cloud when the angles are just right.

The blue colors are easy to understand. When a cloud is not illuminated directly by the Sun, it will simply reflect the color of the sky. Why the sky is blue in the first place is also explained in the link above. You can sometimes get violet colored clouds from this same mechanism. See this beautiful image from my July 15, 2011 post.

Black clouds are black for the same reason as shadows. There is no light illuminating the black part. When clouds are thick enough to block all the light, they can cast shadows on other clouds (or on themselves). It isn’t really “black” — it’s more of a very dark blue, and looks black because of contrast with the brighter clouds.

All of the above colors are much more common when the Sun is behind the clouds, especially at sunrise or sunset. In the middle of the day, when the Sun is higher in the sky, you’ll see most clouds with their usual white colors. This is because the water droplets in clouds reflect all the colors equally, and “all colors” = “white.” In fact, white is the “true” color of normal clouds, so they act like a blank canvas and reflect whatever color light hits them.

But when the clouds contain ice crystals, several other phenomena can produce rainbow-like effects: refraction and interference are mostly responsible. See, for example, my April 30, 2012 post about iridescent clouds, and my January 23, 2012 post about parhelia (aka Sun Dogs).

In this post I’m talking about “normal” clouds produced by some form of water in the atmosphere. Clouds that contain smog from a major city, smoke from large fires, or dust from sandstorms or volcanoes, can take on some very unusual colors, like greenish-brown, true-black, multiple shades of gray, or even hot pink.