OK, so I don’t really have 592 numbered photos of unusual clouds, but I do have quite a few in my “unusual clouds” folder. I’ve been a cloud watcher most of my life. As a young child, I often enjoyed the idyllic experience of lying on the grass and gazing at cloud shapes passing overhead. Like Charlie Brown et al., I saw the usual animal shapes … birds, fish, dogs, pigs. In college, I took two semesters of meteorology. When I learned how clouds formed, much of the mystery evaporated. But the cloud in the photo above had me totally stumped. I had never seen such an unusual cloud structure.

This cloud was west of me, and it was shortly after sunset (which explains the orange colors at the top). The weird part was the morphology, with what appears like 5 “fingers” extending to the south. The lowest finger was maybe around 500 m (1500 ft) altitude, and the highest around 1000 m (3000 ft). I watched over a period of a 10-15 minutes as the fingers grew longer and then started to dissipate. The photo was taken at the point of “maximum finger extent.”

But that’s just a description. I could not come up with any explanation for the morphology. So I consulted with a meteorologist at the local NWS office. Chris Wamsley, Senior Meteorologist/Project Analyst for NOAA, kindly responded. He sent me an annotated copy of my photo (thumbnail below) and an explanation. 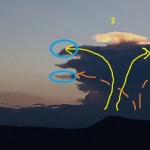 After checking his weather records for the location and date I provided, he was able to come up with an answer:

There was a line of storms to the north of where you were located, and you can tell some lines on the back side were fading out while others seemed more bulky and fuller. This would lead me to believe that the back end of at least 2 thunderstorms with overshooting tops and others that may not have grown as high would produce these back end clouds as in the image below. [thumbnail provided by NWS] 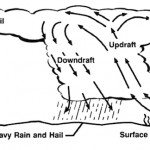 Referring again to the top thumbnail, possibly the #1 in orange was the 2nd highest finger as it has a weakening overshooting top, but still noticeable. The yellow and orange lines represent the updraft areas that would develop the finger-like cloud. So, if we look at your photo, the fingers would suggest at least 5 storms within the line that were strong enough to develop the back end produced by the updraft. I have labeled #2 where the higher overshooting tops were visible in your photo.

So it seems there were at least 5 storms in that line, which from your perspective made them look like they were coming from the same storm. The overshooting tops is a good key to look for, as well as the density on the top of the clouds. If you lighten the image you can see more definition of multiple storm cells. Still a very neat photo.

That made perfect sense to me. What was happening here was multiple storm cells aligned in an ease-west row that, from my perspective, made it appear that all the “fingers” were all coming from a single advancing cloud. Lower fingers were farther west — not physically lower in altitude. And the “fingers” were simply the typical anvils at the top of storm cells. Mystery solved. Score one for science. There’s always an explanation for cloud shapes, even though the movement of air can be chaotic and hard to account for. But in this case, it was only a chance alignment of common storm cells.