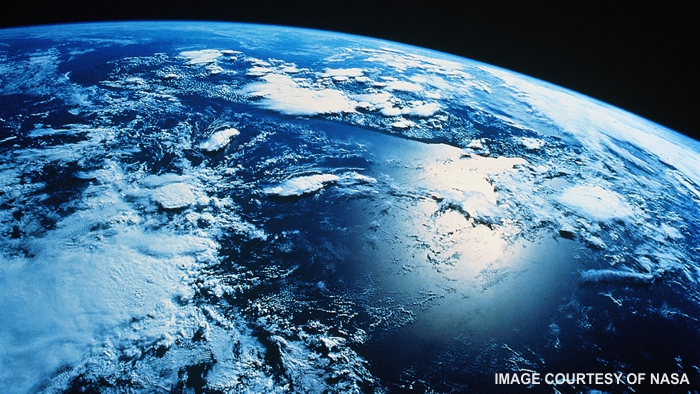 Question: On a recent transcontinental flight the pilot announced we were flying at an altitude of 40,000 feet to avoid some bad weather, and that was about as high as we could fly. When I looked out the window I swear I could see the curvature of the Earth. My question is: Just how much of the Earth can I see from that high an altitude? — JS, New York, NY

Answer: I have a formula for calculating the amount of Earth’s surface visible, given the observer’s altitude. It necessarily assumes you have a clear view of the horizon in all directions, unblocked by buildings or mountains. That’s pretty much the case when you’re flying at high altitude, less so if you’re just on the roof of a tall building.

Some time ago I was reading a short story by Edgar Allan Poe called Hans Phaall. The story was written in 1835, and describes an attempt by the protagonist to fly in a balloon to the Moon. Poe didn’t know there was a vast gulf of airless outer space between the Earth and Moon, but he got one important point correct. And I quote:

“At twenty minutes before nine o’clock – that is to say – a short time prior to my closing the mouth of the chamber, the mercury attained its limit, or ran down, in the barometer, which I mentioned before was one of extended construction. It then indicated an altitude on my part of 132,000 feet, or five and twenty miles, and I consequently surveyed at that time an extent of the earth’s area amounting to no less than the three-hundred-and-twentieth part of its entire superficies.”

Poe was asserting that Hans Phaall, from the lofty altitude of 25 miles, could see 1/320 of the Earth’s total surface area.  When I read a claim like that in a science fiction story, I sometimes check its accuracy just to see if the author took the time to get it right. Occasionally I find errors.

So I used that visibility formula to check Poe’s numbers. We know the total surface area of the Earth is 510 million km2 (197 million square miles). Its radius is 6.371 × 106 m (4000 miles). The rest is geometry and algebra. Poe got it right to within 2%. If you trust me on the math, skip to the chart. If you want to see the geometry, click on the thumbnail below. 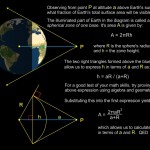 Just take the reciprocal of the numbers in that last column to get the fractional area. For example, using Poe’s numbers:

Likewise, from at ground level (AGL), the average person sees only one 6.5-millionth of the entire surface, but on the International Space Station, astronauts enjoy a view of one 40th of the planet. And I’ve saved you some math by including your airline experience in the fourth row. You were seeing a little over a thousandth of the planet.

Next Week in Sky Lights ⇒ Poetry for Stargazers

What Causes Thunder
Poetry for Stargazers

2 comments on “Q&A: How Much of the Earth Can Be Seen”