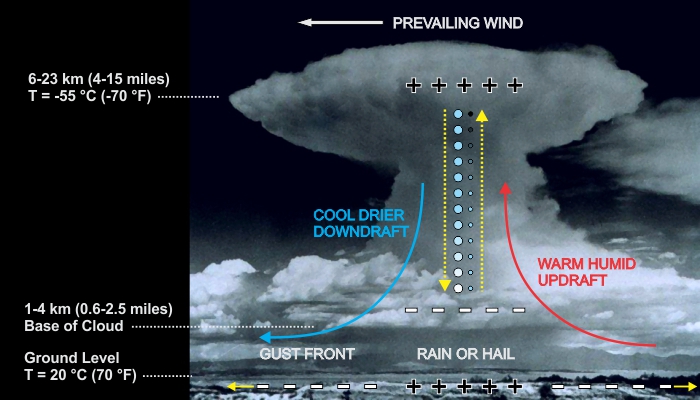 My sister sent me this link about a location in Venezuela that gets an astounding 1.2 million lightning strikes each year. Known as Relámpago del Catatumbo, or “the everlasting storm,” it’s the result of a perfect confluence of meteorological and topographic conditions. Mariners have been aware of this phenomenon since the 15th century. Early explorers of the Caribbean used it as a “virtual lighthouse” to aid in navigation.

Reading that article made me realize I had more to learn about lightning formation, so I did some research on the subject. Turns out studies are ongoing, and scientists still disagree on some of the details. So what I present here is our current best theory of the physics behind a lightning strike.

The graphic shows the essential elements of a “thundercloud,” formally known as a cumulonimbus cloud. Its name comes from the Latin roots: “cumulus” = “towering” and “nimbus” = “rain.” That’s an accurate description of these meteorological monsters. In addition to rain and lightning, they can spawn hail, dust storms, tornadoes, and microbursts.

This is a complex topic, and there’s a lot going on in the graphic, so let’s start with the cloud itself. This is an “idealized” single-cell cumulonimbus. It shows a cloud formed by an updraft of warm and humid air, typical for here in Arizona during our monsoon season. At the top of the cloud, which can approach the edge of the troposphere, a classic “anvil” shape is drawn out by the prevailing wind.

Cumulonimbus can also be generated by the collision of warm and cold fronts, something that happens more frequently in the Great Plains of the United States. Regardless of origin, all cumulonimbus share these features:

So that much we know for sure. The formation and morphology of clouds is well-described by our current theories of fluid dynamics and phase change. The cause of lightning is less well understood, but here’s the conventional wisdom:

Take a look at the thumbnails below. The first is an animated GIF simulating the progression of stepped leaders. The second shows two massive strikes, the more-distant displaying leaders. 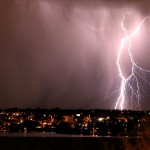 So to the best of our current knowledge, that’s what causes lightning. At least the most common kind. Next week we’ll examine a far simpler phenomenon that’s been well understood since the 1800s.

Next Week in Sky Lights ⇒ What Causes Thunder