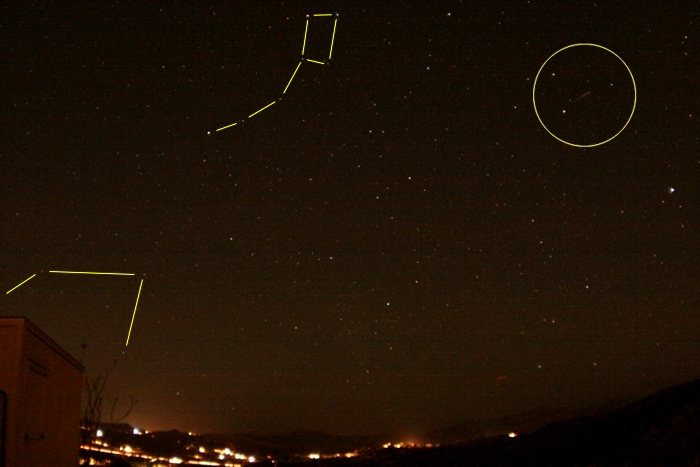 There was supposed to be a meteor shower near midnight on May 23rd. There wasn’t. I stayed up observing till 12:30 am with a good friend from my astronomy club. We finally just gave up, having seen only a few meteors over the 3-4 hour period we were observing. The image above shows the only meteor my camera captured. It’s at the center of that yellow circle, and you can barely see it.

I had a Zenitar K2 fish-eye lens on my Canon EOS-20D to capture the greatest amount of sky. The lens was set at f/2, and provides a 180° (diagonal) field of view. The camera was at ISO 1600 shooting 30 second exposures via an intervalometer. Using 30 second exposures improves the odds of capturing an entire meteor trail, and using ISO 1600 increases the number of fainter meteors you’ll record. Of course, as you can see, it also increases the skyglow.

I aimed to the east of Camelopardalis to avoid the lights of New River. Camelopardalis is the three-segment shape at the lower left. Only part of it was visible, but that’s where the radiant point for the meteors was located.

Included for reference, I’ve also drawn in the Little Dipper (Ursa Minor). The bright star at the end of it’s handle is Polaris, the North Star. This is a good time of year to see the Little Dipper, as it’s high in the sky near midnight. And, as with Camelopardalis, the Little Dipper consists of mostly faint stars easier to spot at higher elevations.

Earth was destined to pass through a swarm of debris (ice, rock, metal) left behind by Comet LINEAR, and this had never happened before. LINEAR was a new and recent comet, and there’s no way to predict how much debris it might have left in its wake. That debris becomes meteors as it enters Earth’s atmosphere. Some predicted it could be a true meteor “storm” of magnitude equal to the famous 1833 Leonids, depicted in the engraving below. Click to enlarge. 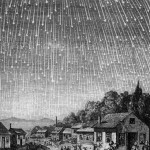 Unfortunately, the storm never happened. The anticipated debris, for whatever reason, just wasn’t there. We saw maybe one meteor per hour, none very bright, and my dismal camera record is displayed as the main graphic on this post. But you can tell it’s a Camelopardalid, since it radiated from Camelopardalis.

As I was reviewing the images captured by my camera, I was reminded of the hazards of long exposures in areas where local airports create their own “light show” in the sky. That’s an airplane on approach to Deer Valley Regional Airport, landing lights on, and tracked for 30 seconds of flight. 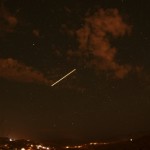 As my friend and I packed up for the night, I was reminded of an old saying: Even a bad day fishing is better than a good day at the office. We busted on our hoped-for meteor storm, but the weather was nice, the conversation enjoyable, and time spent under the stars is always time well spent.

Next Week in Sky Lights ⇒ Meteor Showers and the ISS