Question: I’ve been doing some research on the synchronization of strategies. Oddly enough, we’ve been able to use some models from firefly behavior. Specifically, the amazing ability of some firefly species to flash synchronously, even in large swarms over large areas. That, in turn, led me to your May 19 post about how far away a candle could be visible, where you answered my question about multiple candles. So now I have a followup question.

I’ve learned from the literature that this (male) behavior helps send a better signal to the females, and so increases their chance for reproduction. This makes sense to me, since random flashing would be like “noise,” whereas synchronized flashing would send a clear signal with less visual clutter. My question to you: Would synchronized flashing also allow the males to be seen from a greater distance? — MS, NYU, New York

Answer: First, I thank you for the additional info you sent me off-blog. For my readers, here’s what I learned:

Click on the thumbnail below to see a nice close-up of Photuris lucicrescens. 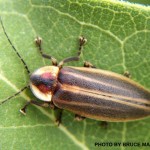 And click on this next thumbnail to see a firefly both “off” and “on.” 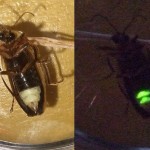 Those white glands on the underside of the abdomen are where the bioluminescence reaction takes place. It produces a distinct narrow-band color of light in the yellow, green, or red part of the spectrum. The color is species-specific.

You are correct about the reason for synchronized flashing. I found supporting research by a neurobiologist at UConn here. That link includes a great video of synchronized flashing. The article also notes that each species of firefly has a unique flashing pattern, recognized by the females as a signal from potential mates.

I can now answer your question. The short answer is: Yes. Flashing in synchrony would indeed allow the swarm of males to be seen from a greater distance. That’s an obvious advantage during mating season. What surprises me is that so few of the 2000 known species have adopted this behavior.

Here’s why flashing in synchrony allows the swarm to be seen from greater distances. Say you have a swarm of some 500 individual insects. If they flash in synchrony they’ve got 500 x 0.125 watts = 62.5 watts total — way more than the candle I wrote about in my May 19 post. If they’re flashing at random, on average only 250 will be “on” at the same time. The flash duration is only a few hundred milliseconds, so most of the time is spent in “off” mode. With only 250 “on” at any given time, the total light output would be 31.25 watts.

The total amount of light visible to any specific female will be further reduced. Consider that, on average, about half the swarm will be facing away from any given female. That cuts the light by a factor of two. Also, the bodies of some insects will block the light from others, but that’s difficult to quantify. Still, it’s clear that the total light output is greater when synchronized, as is the distance from which the swarm could be seen.

So a synchronized swarm will put out around 30 watts, allowing for orientation and blocking. 30 watts is still 6x brighter than a candle. Unfortunately, I have no way to calculate the distance from which such a synchronized swarm could be seen. I couldn’t find anything online about the sensitivity of the female firefly eye, and I’m not an entomologist. Still, I found your question fascinating, learned some new science, and managed to stay within the scope of my Sky Lights theme.

One final note: The overall brightness might not be the important factor. I have a hunch that, wherever fireflies hang out, both sexes are in relatively close proximity. That would suggest it’s more about recognizing the species-specific flashing patterns that identify potential mates. Even though every male knows that pattern instinctively, if they’re swarming (moving around in all directions), what the female sees will be a confusing pattern of flashes that makes it difficult to home-in on a specific male. Synchronized flashing during mating season has a definite evolutionary advantage.