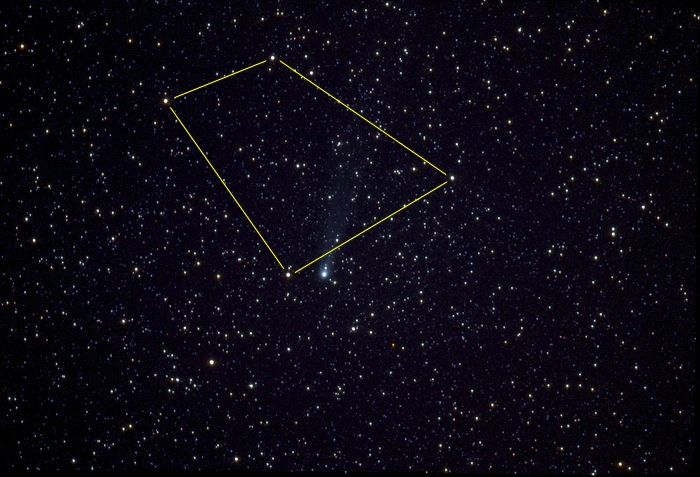 We can make a very strong case that astronomy is the world’s oldest profession. Back in the days before artificial illumination, the nights were dark indeed, and what you could see with the unaided eye was something like the above image. That’s a lot of stars. In a light-polluted urban environment, you might see the brightest 5 of those stars.

The image above is a 1-hour tracked exposure of Halley’s Comet when it was moving through the faint constellation Crater (The Cup) back in 1986. Only part of that constellation is captured in my image; to see its full shape, click on the thumbnail. 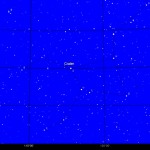 I needed an image that showed a good example of what pristine skies would look like, so I used this one. And as a bonus, you get to see a reasonably good image of Halley’s Comet, shot when I was just learning astrophotography using an Olympus OM-1 with real film (Ektachrome ASA 1600). Now back to ancient history …

Scientists are not sure exactly when our species developed what we would today call “intelligence.” Estimates range from 50,000 years ago to more than 100,000 years ago. The night sky (when you can see it) looks pretty much the same now as it did back then, with the same stars and constellations. And if you’re up at night, you will not only see the sky — you’ll start to notice patterns and learn some useful facts.

The spatial patterns (groups of brighter stars) were traced like dot-to-dot images, given names related to their shape, and became the constellations. There are 88 such groups officially recognized by the IAU. Crater takes its name from Greek mythology, but other cultures see other patterns. In Chinese astronomy, Crater is a subset of a larger constellation called Vermilion Bird of the South.

Whatever patterns you see, they are easily recognized, familiar images from your culture, never changing in shape or size, and instantly orienting you in space and time. But it’s the temporal patterns that reveal the most useful information.

The human species has a natural sense of curiosity, a desire to see patterns, to predict, and to simply understand. In this modern era, those bullet points above have become largely irrelevant. The need to understand the sky has been replaced by technology: calendars, clocks, magnetic compasses, GPS, NWS, and HVAC do that work for us.

Well, except maybe that last bullet. I think the need for a sense of wonder is still there, but light pollution has driven many people inside. They get their sense of wonder, instead, with the help of digital entertainment. If you’re reading Sky Lights, you’re probably at least a casual skygazer, but we are a shrinking minority. Is that “progress?”

Next Week in Sky Lights ⇒ Why Fireflies Synchronize

Q&A: The Distance from Which a Candle Can Be Seen
Q&A: Why Fireflies Synchronize

2 comments on “The World’s Oldest Profession”