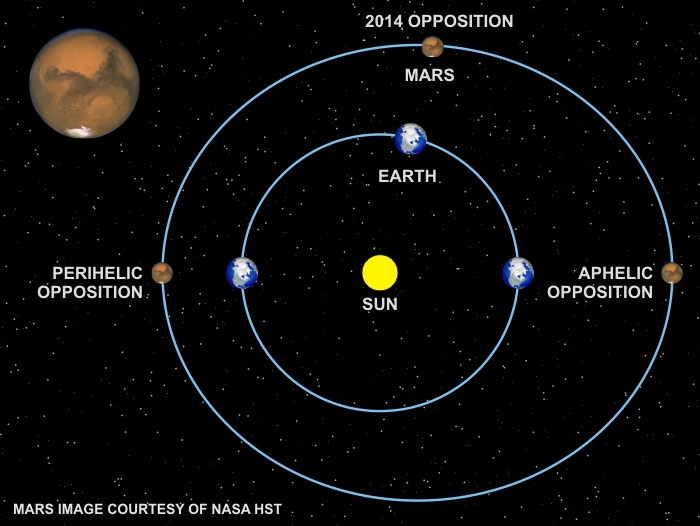 Mars, the Red Planet, will reach opposition on April 8th. That’s its closest approach to Earth in its orbit around the Sun, and your best chance for a good view through telescopes or binoculars. It won’t look that large in any common binoculars, but you’ll definitely see the bright “reddish” disc of the planet. And you don’t need to catch it exactly on April 8th, as the view will be excellent for most of April.

As the graphic shows, the orbit of Mars is distinctly elliptical compared to Earth’s orbit. That means some oppositions bring Mars closer to Earth than others. Earth’s orbit takes it around the Sun in 1 year, but Mars takes 1.88 years (that’s in “Earth years”). Since they both orbit the Sun in the same direction, Earth and Mars are like “runners” on a track, with the faster Earth “lapping” Mars once every 2.135 years. Their motions are not synchronized, so opposition can occur anywhere along the Mars orbit shown in the graphic.

Note: The Sun and planets are not drawn to the same scale as the orbits, and the elliptical shape of Mars’s orbit has been exaggerated for the purposes of this discussion.

Since the apparent size of any planet varies depending on its distance from the observer, Mars exhibits the greatest change in size of all the planets as seen from Earth. It will appear nearly twice as large at a perihelic opposition as it does at an aphelic opposition. The opposition on April 8, 2014 is about midway between those two as indicated in the graphic.

If you look toward the east, about 15° above the horizon, you can’t miss it. And Mars will continue rising higher as the night progresses. But if you do need help locating it, click on the thumbnail below for a sky chart generated using my astronomy app. The two bright stars nearby (Arcturus and Spica) should help you zero in. 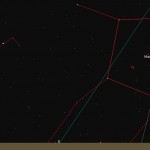 For comparison, Arcturus has a magnitude of -0.04, and Spica +1.04. Mars will not only be the brightest object in that part of the sky, it will also slightly outshine Sirius (M = -1.47), the brightest star in the sky. Look over your right shoulder to see Sirius that evening. There will also be a First Quarter Moon up that night, shining with approximate magnitude -10.0, but it won’t interfere with your view of Mars.

One final note: For the sake of comparison, the inset at upper left in the graphic shows Mars at its largest apparent size (about 25″). The icons used to show Mars on its orbit are scaled down to show Mars at its smallest apparent size, when Mars and Earth are on opposite sides of the Sun, and at their greatest separation of 377,000,000 km (234,000,000 miles). Its apparent size is a mere 5″ at that distance. That’s a factor of 5 difference, and that’s why, if you want to see Mars, oppositions are your best opportunity.