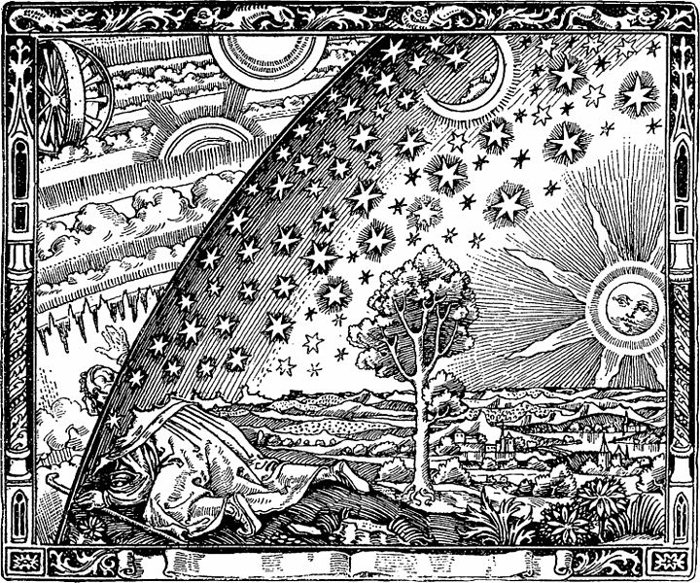 Question: Sir, may I ask a question? Is it true we live outside the Earth and not in it? — Tanzanian student, age 13, after seeing the night sky through a telescope for the first time.

Answer:  This question was asked of Kai Staats, a colleague who recently journeyed to Tanzania. While he was there, Kai assisted at an astronomical observing session outside the city of Arusha for a group of school children.The event was sponsored by Chuck and Susan Ruehle, and Mponda Maloso, founders of Telescopes to Tanzania. Click on the thumbnail below to see those students viewing the Sun during the daytime session. You can read the full account on Kai’s blog at: http://www.kaistaats.com/blog/2013/05/void-of-education-part-1/ 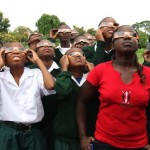 Kai answered the student’s question as you would expect from an adult who has studied astronomy: We are on the Earth, not in it, but first let me explain what I mean when I use the word “Earth.” He went on to explain the modern heliocentric cosmos: how the Moon orbits the Earth, and how the planets (including Earth) orbit the Sun. He told them that the stars are like our Sun, some smaller, some larger, but so far away we can only see them as bright points of light.

That question shows how differences in culture, age, education, and past experience, can nuance one’s perception of the cosmos. At first taken aback by the question, Kai was able to answer it to the student’s satisfaction. But the incident stuck in his mind, and he shared this story with me when he got back to the States.

The graphic reproduced at top is a classic engraving by an unknown artist. It was first reproduced (without attribution) in the book “The Atmosphere: Popular Meteorology” by Camille Flammarion, ca. 1888. It shows the medieval cosmology that was replaced by our modern Copernican world view over the course of the 17th century.

Popular interpretation is that this engraving represents the pre-Copernican “flat Earth,” with the dome of the night sky attached to the horizon. An explorer has apparently reached “the end of the Earth” and poked his head through the firmament to see what lies beyond. On the “outside,” he can see the wondrous “cosmic machinery” surrounding what is normally visible to our eyes.

This engraving can be found in most introductory astronomy textbooks. I’d seen it before, and it immediately came to mind when Kai told me about the student’s question. The question was in no way naive, and serves to remind us how the world view held by others on this planet can be conceptually different from our own.

The young student asked her question in English. She used the word “Earth” in its pre-Copernican sense, and apparently considered what she saw in the sky as being part of the Earth. It wasn’t until Copernicus published his revolutionary work De revolutionibus orbium coelestium (On the Revolutions of the Heavenly Spheres) that people began to think of the Earth as just another of the then-known planets. And that was in 1543.

Previous to 1543, “Earth” was where mankind resided, the unmoving center of the cosmos, the physical ground upon which we stood. The other planets were just points of light, so named because they wandered through the constellations of stars. For more about that, see my 22 Nov 2006 post. It wasn’t until 1610 that Galileo’s telescope showed the planets to be physically different from the countless stars among which they wandered.

Running into a pre-Copernican world view is not uncommon in the Third World. Astronomy is a low priority for educators in countries that struggle with the more pressing matters of health, nutrition, literacy, and security. This is slowly changing thanks to the efforts of groups like Telescopes to Tanzania. Kai’s story gives one pause for thought, and provides a privileged insight into another world view.

Next Week in Sky Lights ⇒ The Fastest Rocket

Conjunction of Mercury and the Moon
Q&A: The Fastest Rocket
HOME