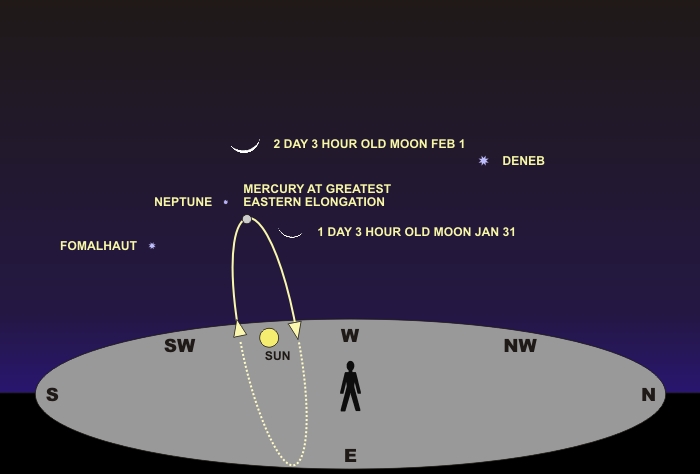 Mercury is a tough planet to spot, but on January 31 the young Crescent Moon can help you find it. The Sun will set around 6 pm, and as the sky slowly darkens, your chances of finding Mercury improve. Of course, as the Sun sets, so does Mercury, so the “sweet spot” for finding it depends on the clarity of your sky, and an unobstructed view of the western horizon. For most northern hemisphere observers, that “sweet spot” will occur around 6:30 pm, at which time Mercury will be about 10° above the horizon.

Mercury’s orbit is tilted by 7° with respect to Earth’s orbit. That, as well as the latitude from which you observe, affects the tilt of Mercury’s orbit with respect to your horizon. In this case (for northern hemisphere observers) the orbit will be nearly perpendicular to the horizon. Sometimes the orbit is more parallel to the horizon, in which case Mercury sets around the same time as the Sun, making it nearly impossible to see. On Jan 31, the tilt is nearly optimal for spotting Mercury.

Visually, even through a telescope, Mercury appears as a bland grayish disc. It goes through a phase cycle, as does the other interior planet, Venus. On Jan 31 Mercury will be at quarter phase (half lit half dark). It will shine at magnitude -0.7, brighter than Fomalhaut or Deneb, but will be partly obscured by the residual glow of dusk.

Binoculars will definitely help, but you can see this conjunction with the naked eye if your sky is clear. Just scan above the western horizon and look for a thin Crescent Moon. Mercury will be 5° (10 Moon diameters) to the left of the Moon, and slightly higher up in the sky. Note: Object sizes in the chart are NTS.

FYI: The planet Neptune is also nearby, but you’ll need a telescope to see it. It will appear 1/3 the size of Mercury due to its great distance: 4.6 billion kilometers (2.9 billion miles). Neptune’s magnitude will be a feeble +8.0, but the planet will show a fully circular faint-bluish disc if you have sufficient magnification — at least 100X but 200X is better.

The Moon will be really thin on Jan 31, so if you can’t find it, try again on Feb 1 when it will be more easily visible. Both Moon positions are shown in the chart above. The bright stars in this general area (Fomalhaut and Deneb) are included in the chart for positional reference.

Next Week in Sky Lights ⇒ Earth and Sky Divided