We get an occasional dusting of snow here in lower Arizona. The New River Mountains, about 15 km (10 miles) northeast of us, at an elevation of 1500 meters (5000 feet), get some snow at least a few times every Winter. It never lasts more than a day or two, but when it happens, it’s a beautiful visual effect.

I wrote about “pink snow” in a previous post, waxing philosophical about the meaning of “color.” That’s hard to avoid when you talk about sensory perception, which is a highly subjective phenomenon. I’ll try to keep it less philosophical this time. If you compare the photo above with my 16 April 2012 post, you’ll see there are some definite differences in color balance and contrast. Both photos were taken at sunset, but under different atmospheric conditions (overcast in the above photo vs. clear on 16 April 2012). Of course, earlier in the day the snow appeared its typical bright white.

In both cases, the characteristic reddening of the landscape near sunset renders some striking shifts in hue: the white snow becomes pink, the green vegetated hills become brown, and the overcast sky takes on an eerie shade that I didn’t really know the name of. “Reddish-gray” and “grayish-red” might be technically correct, but aren’t sufficiently descriptive. So I tried a simple experiment to find out what the “correct” name might be.

The “eyedropper” tool in my graphics app says that shade is RGB 165, 132, 135 (hex #cd9b9b). And if I look up that color online, it doesn’t have a name. The closest I could find is called Rosy Brown 3, but that still didn’t look quite right. When I thought more about this, I realized what should have been obvious: not all colors have names.

Sure, if you get yourself a Crayola deluxe 150 assortment, every one of those crayons has a name for its color. Same thing at your local hardware store, where you can browse thousands of paint color swatches mixing different hues, shades, and saturations. They all have names too. But the variety of colors you can see in nature is essentially infinite.

If you have a modern computer monitor and graphics card, you probably have it set to display colors using 24 (or more) bits per pixel to encode color information. That 24-bit setting gives your monitor the ability to display 224 = 16,777,216 different colors, the vast majority of which don’t have names. Scientists claim the human eye can distinguish 10 million colors, but we don’t have anywhere near 10 million color names in the dictionary.

Whatever your visual acuity, the perception of color is a remarkable phenomenon. Not all species enjoy full color vision. And some species can see colors into the infrared and ultraviolet (which are invisible to human eyes). See this interesting report by a veterinary expert: Do Animals See in Color?. So even if you don’t have a name for the color you see, savor it. Click on the thumbnail below to see how a sunset would appear without color vision. 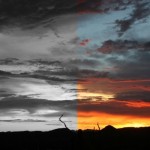 Next Week in Sky Lights ⇒ Conjunction of Mercury and the Moon

Very Young Moon
Conjunction of Mercury and the Moon
HOME