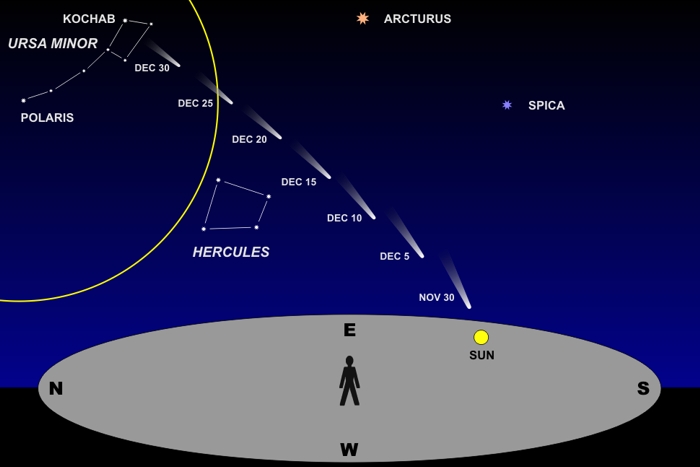 Date: All of December (and beyond?)
Time: shortly before sunrise (Dec 1-20), up all night (Dec 21 and beyond)
Place: the eastern through northern sky

There’s a comet in the sky, and it could be spectacular. Then again, it could be destroyed when it passes closest to the Sun (at perihelion) on November 28 at a distance of only 1.9 million km (1.2 million miles). That’s so close the comet might be fragmented by the Sun’s gravity, or vaporized by the heat. In a “perfect universe” the comet would be heated just enough to develop a long bright tail and emerge from perihelion as a “comet of the century.” It might even become bright enough to see in the daytime. But that’s a lot of “could” and “might.”

Astronomers cannot easily predict what to expect from comets. There’s just too many variables. As we understand them now, comets are loose conglomerations of dust and ice that fall toward the Sun from far out in the solar system, many from beyond the orbit of Pluto. It’s cold out there, so many types of ice (water, carbon dioxide, methane) will condense onto the surface of the comet. As the comet nears the Sun and warms, those ices will evaporate and form a coma (cloud) around the comet nucleus. Take a look at this photo captured by the ESA spacecraft Giotto as it flew by the nucleus of Comet Halley in 1986. You can see the gas jets that form the coma.

Of course, it’s the comet’s tail that always gets the most attention. Pressure from the solar wind and radiation will blow gas and dust out of the coma forming a tail that (generally) points away from the Sun. That tail can be ten of millions of kilometers long, and span a large section of the sky. Take a look at this image of Comet McNaught over the Pacific in 2007, or this illustration of Comet Kirch, aka the “Great Comet of 1680.”

The comet we’ll see this December is named ISON, for the International Scientific Optical Network. The co-discoverers, Artyom Novichonok (left) and Vitaliy Nevskiy are ISON members. You can read more about their discovery here. ISON is only an average-sized comet, with a nucleus about 4.8 km (3 miles) in diameter, but its close approach to the Sun could produce a spectacular tail.

ISON will pass closest to Earth on December 26, at a distance of 64.2 million kilometers (40 million miles). At about that time it will become circumpolar, and remain up all night for mid-northern latitude observers. The yellow circle in the chart above shows the extent of circumpolar sky for mid-northern latitudes. Southern hemisphere observers will not have as good a view, but are encouraged to check with local astronomy organizations regarding ISON’s visibility.

About the chart — I wanted to create a graphic that would be easy to read and helpful for finding ISON. So I kept it simple, but please note the following caveats:

If ISON is as good as many hope, you won’t need a finder chart (or telescope) to locate it. All you’ll need to do is look in the right direction at the right time. Binoculars are highly recommended. For the technically inclined, see the link below for live updates on ISON’s location and brightness.

You’ll probably be up late on December 24, or up early on December 25. So take that opportunity to look for Comet ISON, and you just might be surprised at this holiday gift from the Cosmos.

Next Week in Sky Lights ⇒ Fire in the Sky

Venus in Sagittarius
Q&A: Fire in the Sky
HOME