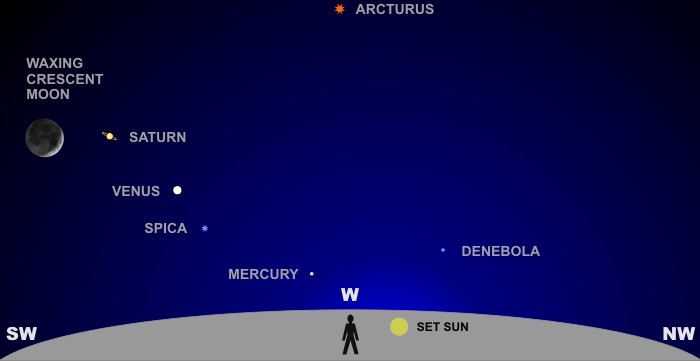 Date: September 9-10
Time: From sunset at 6:45 pm, to a few hours thereafter
Place: the southwestern sky

There will be 3 planets, one star, and a Waxing Crescent Moon partaking in this celestial dance. On September 10th, the Moon will have moved out of the grouping and be 12° farther east. But on the 9th, it’ll be an easy starting point to “star hop” from one object to the next down the line. You might even spot elusive Mercury hiding in the glow of dusk, but you’ll need clear skies and an unobstructed view of the western horizon. Working our way down …

Binoculars on a steady tripod will help when observing this conjunction. Lunar earthshine will be more visible, you should be able to make out Saturn’s straw-like color and rings, Venus will show a gibbous phase (appearing slightly off-round), Spica’s blue color will be more apparent, and your chances of spotting Mercury greatly improve.

Since all these objects are relatively low in the sky, they’ll set as the Sun did, sequentially disappearing from view in a matter of 2-3 hours. So there’s a “sweet spot” for catching these objects that starts 15 minutes after sunset. As the light of dusk fades, the fainter objects will be more easily seen. Good luck bagging these temporary quintuplets.

Next Week in Sky Lights ⇒ Where the Sun Goes at Night

An Optical Puzzle: Solved
Q&A: Where the Sun Goes at Night
HOME