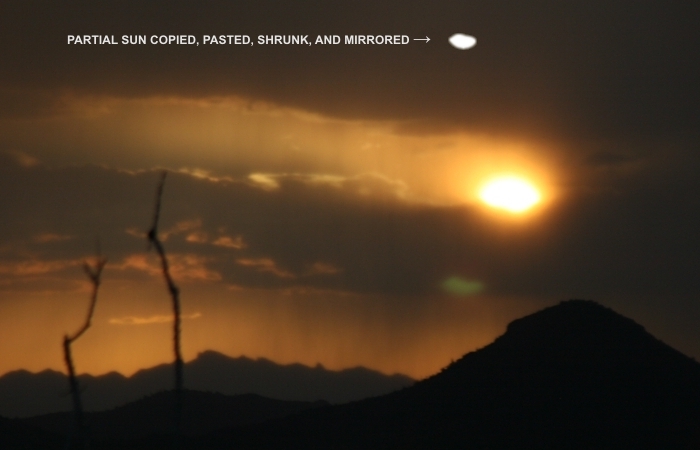 Roger Serrato, a good friend and fellow astrophotographer from Flagstaff, sent me the above photo, taken near sunset on a cloudy rainy day. It’s a bit out of focus, but notice the weird green object below and to the left of the partially obscured Sun. What is that? Roger wanted to know, and as soon as I saw this image, I was curious too.

My initial impression was that it could be a green flash appearing as an inferior mirage. But as it turns out, I was way over-thinking the puzzle. Searching online for “green flash” + “inferior mirage” (which nets 6000 hits), turned up nothing close to what I was looking for. I did find a cool related simulation though.

So I decided to send a copy of the image to Les Cowley, an expert on atmospheric optics. You will find his website on my Links page. Here’s what he had to say:

Sorry to disappoint your friend but that is an internal lens reflection. These are quite common and often mistaken for atmospheric optical effects. The acid test for a real effect is that it can be seen by the naked eye or appears on three or more hand held (to ensure the camera is moved) images in exactly the same position.

Internal lens reflections can produce some strange effects, as you’ll see in this image search. They’re all based on the fact that light rays can bounce back and forth between lenses, creating spurious effects. It’s normally noticeable only for the brightest object in the scene (like the Sun). Multiple copies of that object can appear: offset, rotated, mirrored, shrunk or stretched, and color-shifted. And that’s what seems to have happened here.

So to test Cowley’s explanation geometrically, I copied that segment of the Sun visible above the cloud, shrunk it in size, and then transformed it as a mirror image. That’s the inset you see at the top of the photo. I didn’t bother with shifting its color to greenish, as it was already apparent I had a pretty good match. Puzzle solved.

Next Week in Sky Lights ⇒ Quintuple Conjunction in the West  [occurs on next Monday, September 9]