Question: I found this post very interesting. Could you relate that topic to how altimeters function? For example, since altimeters sense air pressure, how does changing weather affect the reading? — MH, Albuquerque, New Mexico

Answer: As promised in my reply to your comment on that post, here’s the answer. For other readers who haven’t seen that post, they should probably check it out. You are correct that altimeters sense air pressure. They work on the basic fact that, the higher your altitude, the lower the air pressure. And an aircraft-grade altimeter, when properly calibrated, can determine your altitude to within about 15 meters (50 feet). We’re not talking here about the kinds of “altimeters” hikers, cyclists, hang gliders, and skydivers usually carry.

Understanding the physical mechanism of altimeters will be helpful. They’re based on what’s called an aneroid barometer. The thumbnail below is a photo of the “guts” of a water pressure gauge that operates the same way. It’s so sensitive I can blow into the port, expand the brass bellows, and make the needle move. Click to enlarge.

The actual mechanism that translates bellows movement into display movement is a clever system using levers and gears. You can get the basic idea by studying the wire-frame diagram in the main graphic. But the thumbnail below shows a closeup of a similar mechanism in that water pressure gauge. Click to enlarge. 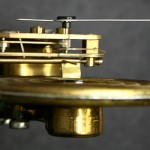 That’s the same way standard aircraft altimeters function, with a few minor differences to improve accuracy and readability. For one, note the “barometric scale adjustment knob” in the main graphic. In order to compensate for air pressure changes caused by high and low pressure weather systems, you’ll need to know what the atmospheric pressure is at ground level. A radio call to a local airport can provide that info. Adjust your altimeter accordingly, and you’ll enjoy a huge improvement in altimetric accuracy.

Note the two small windows on the altimeter faceplate. They show 1013 MB (millibar) and 29.92 INHG (inches of mercury). Those are both typical QNH (sea level) settings — not a QFE from an airport located above sea level.

Most military aircraft and some commercial aircraft have made the move to totally electronic digital displays that automate the calibration process via telemetry. Most private aircraft use the manual calibration method described above.

Triangulation with GPS satellites has proved unreliable for precise altitude measurements. So military aircraft also use a radar altimeter system to bounce a radar wave off the ground, time the return of its echo, and calculate their altitude using the simple formula:

Accuracy can be within a fraction of a meter. All commercial aircraft use this system during takeoff and landing. Sonar has also been tried, but found lacking. Unlike the speed of light (and radar waves), the speed of sound is far too dependent on air temperature and generates significant measurement error.

So there you have it. Probably more than you needed to know about altimeters. And I have to say I kind of violated my rule about only answering questions about “things you see in the sky.” But hey, you’re a pilot, and when you’re in the sky, you see your altimeter, so I guess it was a justifiable exception.

Next Week in Sky Lights ⇒ An Optical Puzzle: Solved

Q&A: Water in the Atmosphere
An Optical Puzzle: Solved
HOME