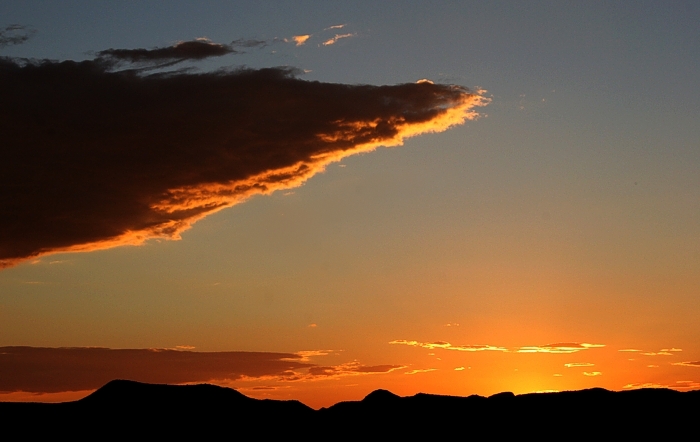 Question: I’ve enjoyed watching clouds all my life. I’m pretty sure clouds have something to do with water, but water is transparent, right? So what exactly am I seeing when I look at a cloud? — GH, LA, California

Answer: Clouds have everything to do with water, though you wouldn’t guess that from the 3D appearance of the goliath captured in this photo. The first thing you need to know is that water vapor is transparent, like most gases. But under certain conditions of humidity, temperature, and pressure, it will condense into tiny droplets of liquid water. These droplets have diameters in the range of 0.02 mm (0.0008 inch). They’re too light to fall, so the droplets just float like dust.

The cloud in the photo above shows only about a third of its full size, but I’d estimate it was about:

If it’s a typical cloud, it contains around 0.5 grams of water per cubic meter. Do the arithmetic. That cloud has somewhere around 40 million kilograms (88 million pounds) of water in it! So how the heck can it float in the air?

Water droplets smaller than 2 mm don’t weigh very much. 2 mm droplets are a mere 0.004 grams, so they tend to “float” because of updrafts and air drag. If they grow larger, by merging or absorbing more water vapor, they’ll generally fall as rain. I say “generally” since, in the extreme updrafts found inside thunderstorms, the droplets can grow even larger, sometimes freezing and falling as hail. For that to occur, the droplets must be carried to an altitude of around 2600 meters (8000 feet), where the temperature is often below 0 °C (32 °F). The updrafts in a thunderstorm can easily do this.

NOAA has a nice page showing all the cloud categories they’ve defined. See it here.

So what you actually see when you look at a cloud is the result of light interacting with those water droplets. And there’s a plethora of ways light can interact. But for your typical cloud during daytime, what you’re seeing is white light from the Sun scattered in all directions. This is what gives the cloud its typically snow-white appearance. Those clouds look more like flat fluffy objects painted on the 2-dimensional dome of the sky. You don’t really get a sense of their 3D volume.

Things get much more interesting at sunrise or sunset, when orange and red light from the Sun predominate. The photo above was taken just after sunset. Not only does the cloud appear orange, but you can also see how it shades itself and appears more 3D than daytime clouds. Lit from the side, any object will better show its true shape.

Next Week in Sky Lights ⇒ Where Stars Come From