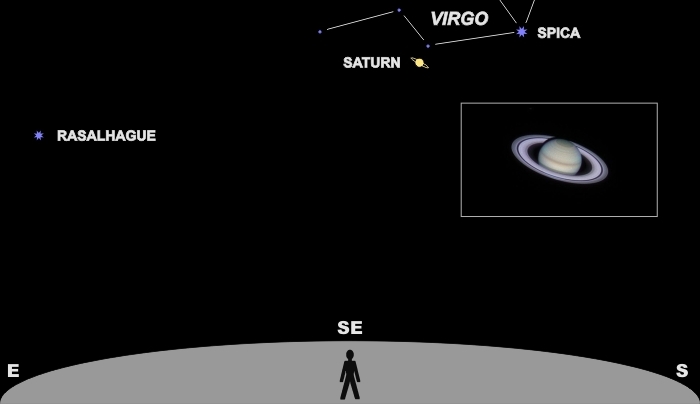 Planet Saturn was at its closest approach to Earth back on April 28th, but it’s still easily visible in the southeastern sky. There’s not many bright objects in that general direction, so the Spica-Saturn conjunction makes it easy to find using only your eyes. With binoculars, you should just be able to make out the ring system as shown in the graphic above. With a telescope, your view will look more like the inset. The rings of Saturn will be near maximum tilt at around 18° and cast a visible shadow on the planet. Saturn is currently 1.4 billion km (840 million miles) from Earth.

Just using your eyes you’ll also notice that Saturn appears yellowish (some call it “straw colored”) in comparison to Spica’s distinctly bluish tint. Spica is a blue giant star located 260 light years from Earth. It’s the brightest star in the constellation Virgo, and the 15th brightest star in our sky. The other stars in Virgo are extremely faint, and cannot be seen unless your sky is dark, clear, and moonless.

This is also a good opportunity to look for something else that most people never notice. Even though Saturn and Spica are now very near the same apparent brightness, and also near the same elevation in the sky, note how Spica “twinkles” and Saturn shows a more “steady” light. Why stars twinkle, and planets don’t, was explained in my May 7, 2012 post, and earlier in an Aug 3, 2005 post. This effect is easy to see if you know what you’re looking for.

Even if you don’t want to understand the physics behind this effect, make a point of looking for it. It’s one of the ways to tell a star from a planet, both of which just look like points of light to a casual observer. There are other ways to distinguish between the two, but the “twinkle test” is the easiest and requires no special equipment.