I’ve received several questions from readers since my How Telescopes Work post. They all got the basic idea, but wanted to know just how a telescope (or binoculars) creates the magnified image you see with your eyes. To understand how this optical “magic” happens, we’ll need to talk about a phenomenon known as a real image.

Play each of the above videos and watch what happens to the light rays (yellow lines) as they pass through the lens (blue) of the refractor, or bounce off the curved mirror (white) of the Newtonian reflector. The place where the rays converge is called the focus or focal point, and something truly remarkable happens there — a real image is formed.

Anticipating your question, I should note that in the Newtonian reflector, that little diagonal mirror isn’t really necessary. Removing it creates what is called a prime focus optical system, quite popular with photographers. The diagonal is mainly used because it provides a convenient way to view the image. You don’t have to climb up to the top of the tube to see it, and some of these telescope tubes can be quite tall.

There are two ways to cause light to converge: use a lens to bend the light by refraction, or use a curved mirror to reflect the light into a focus. Other more-complex telescope designs combine both lenses and mirrors, but we don’t need to get into that to understand the basic principles of magnification.

As you can see, the light doesn’t stop at the focus. It passes through that point and diverges beyond it. So the real image is a “source” of light rays, just like any physical object you can see — for example, a small light bulb. If the telescope is pointed at the Moon, your eyes can see a real image of the Moon apparently floating in the air at the focus.

But if you look at the image through an eyepiece (not shown) you can magnify that image hundreds of times. It’s the same as when you use a magnifying glass to enlarge any small object. The difference is that eyepieces are much more powerful magnifiers than common magnifying glasses.

The eyepiece causes the light rays to diverge at a greater angle, so the object being viewed looks closer (larger) than it is in reality. Note that the closer any object is to the eye, the more its light rays will diverge over the eye’s own lens. Click on the thumbnail below for a diagram of how that works. 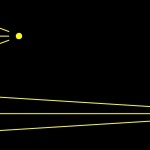 The more the eyepiece causes the rays to diverge, the closer (larger) the object appears. Eyepieces use a combination of up to 8 optical elements (lenses) to bend the light rays into greater divergence. And this is how telescopes magnify.

Next Week in Sky Lights ⇒ Music From Space