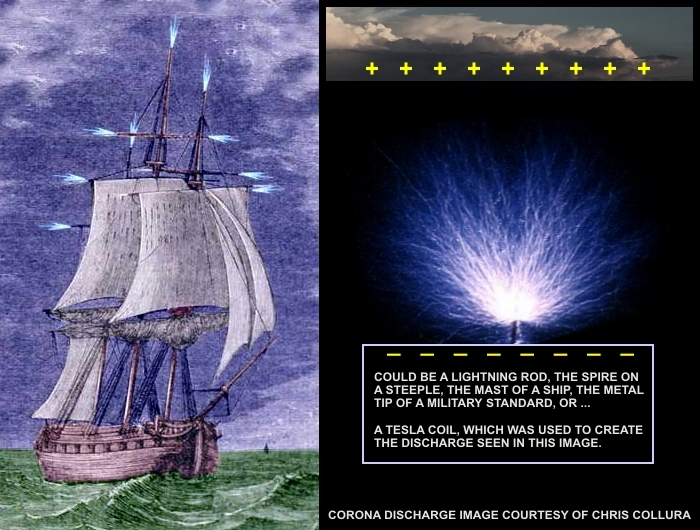 Question: I heard about this mysterious apparition called St. Elmo’s Fire. It’s apparently some kind of rare electrical effect related to lightning and storms. Can you explain what it is, and what causes it? — CH, Hales Corners, WI

Answer: St. Elmo’s Fire isn’t really “fire,” but it is a real, and well understood, electrical phenomenon. The answer to your question is not that complicated, and no equations are required, but there’s a fair amount of physics involved.

I found the above images online, and they’ll help me answer your question. My thanks to Chris Collura, storm chaser and scientist, for permission to use his image of a corona discharge. That discharge was powered by a Tesla coil he built in his own lab. For more of his amazing images, see his website at: http://www.sky-chaser.com. Scroll down to the bottom and click on the link to “Tesla Coils Plus Weird Science Stuff.”

Comments by Collura: “This is a time exposure of a spark breakout from a small wire attached to the top load of my Tesla coil at full power. The time exposure is about 5 to 10 seconds (Canon Rebel 2000, Fuji 400, f 5.6, bulb setting). The corona discharge is 5 inches [13 cm] in diameter. The electrical potential was 150,000-200,000 volts. The wire tip shows how Tesla coil energy wants to radiate into the air due to the RF frequencies involved.”

I’ve observed a similar effect on the tips of lightning rods during electrical storms (from a safe distance through binoculars). It doesn’t appear as intense as the image above, but the principle is the same. Here’s what’s happening.

When you pile enough electrons onto an object by whatever means, these negatively charged particles all repel each other with an electrostatic force. At some point, this repulsion will overwhelm the ability of air to act as an insulator, and the electrons start to “leak” into the air. The violet color is caused by the excitation of nitrogen molecules that make up 70% of our atmosphere. That’s why all sparks have this characteristic color. The tiny sparks that sometimes jump from your finger to a wall switch or doorknob, and large sparks like lightning bolts, differ in brightness but have the same color.

Charge leakage is enhanced if the charged object has a sharp point. Electrons are more “crowded” at such a point and more strongly repel each other. Also, the small radius of curvature near a point creates a stronger electric field that more easily ionizes the air. And ions allow air, normally a strong insulator, to conduct electricity.

On a lightning rod, or other electrically conducting pointy object, a corona discharge will form during certain atmospheric conditions. It’s easier to understand if we assume a positively charged cloud located above that object (as in the graphic). But it also works with negatively charged clouds, in which case electrons are just moving in the opposite direction.

A common misconception is that lightning rods are designed to attract lightning. Not so — they’re designed to prevent it. The sharp tip forms a corona discharge, allowing electrons to be exchanged slowly (and safely) between the earth and sky. When a negative charge meets a positive charge, they neutralize each other. This is what prevents the unchecked charge buildup that would eventually result in a lightning strike.

Of course, lightning rods are not 100% effective. If the charge buildup is too rapid, even a home protected by lightning rods can be hit. If that happens, the bolt will usually strike a lightning rod, which then channels most of the energy through a thick wire into the earth. This minimizes damage to the structure.

So here’s where good St. Elmo (aka Erasmus of Formiae) comes in. He lived during the 3rd century AD, and became the patron saint of sailors. If a corona discharge forms on the mast of a ship, and starts neutralizing charges, that ship is less likely to be struck by lightning. In the 21st century, we understand why.

In the 3rd century, the science of electricity was virtually nonexistent. But sailors did notice a correlation between the appearance of the eerie violet glow, and their ship not getting hit by lightning. The corona discharge was interpreted to be a “sign” from St. Elmo that their ship was under his protection. Hence the term: St. Elmo’s Fire.

Next Week in Sky Lights ⇒ Why February has 28 Days