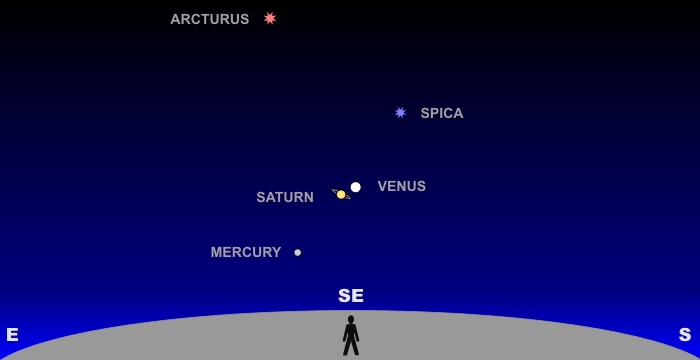 There’s a beautiful grouping of five celestial objects visible just before sunrise in the southeastern sky. You’ll need to get up early to see it, but it’s well worth the effort. You’ll be rewarded with a display that doesn’t happen very often. Three planets and two stars will join for a temporary conjunction. That means they’ll all be fairly close to each other. More precisely, they will have approximately the same celestial coordinates.

Saturn and Venus will be especially close. So close, in fact, that if you have a telescope, you’ll be able to get both in the same field of view at lower magnifications. If you do look through a telescope, or even binoculars, you should be able to notice that Venus looks like a “Quarter Moon.” The fact that Venus goes through phases like the Moon was first discovered by Galileo after his invention of the telescope back in 1610. See my April 2 post for some images of that effect. You’ll also see the rings around Saturn. The two planets will be about one Moon-diameter apart at closest approach.

They’ll remain in this tight grouping for a few days. If you observe several days in a row you’ll see them gradually drift apart. All three of these planets will drift lower (eastward) with respect to the stars, but Venus and Mercury will show more rapid motion compared to Saturn. Planets normally drift to the east with respect to the stars, but during retrograde, they drift to the west. Both Mercury and Venus have recently completed their retrograde motion cycles.

Astrologers claim that when a planet is in retrograde, significant effects occur in some peoples lives. Astrology is what’s know as a pseudoscience (and even that’s being generous). Retrograde motion is an optical illusion caused by Earth’s own motion relative to the planets. Watch this amusing dialog about astrology between a believer and a non-believer (scientist) from the popular TV series “The Big Bang Theory.”

To the unaided eye, there’s not much difference between the visual appearance of a star and a planet. It takes continued observation over a period of time to sort them out, but there are visual differences. Unlike stars, planets will:

So make a point of getting up early to enjoy this celestial show. I promise you won’t be disappointed. The display will last a few days, so if you don’t catch it exactly on Nov 26, no worries.

Next Week in Sky Lights ⇒ Seeing the Sun Safely