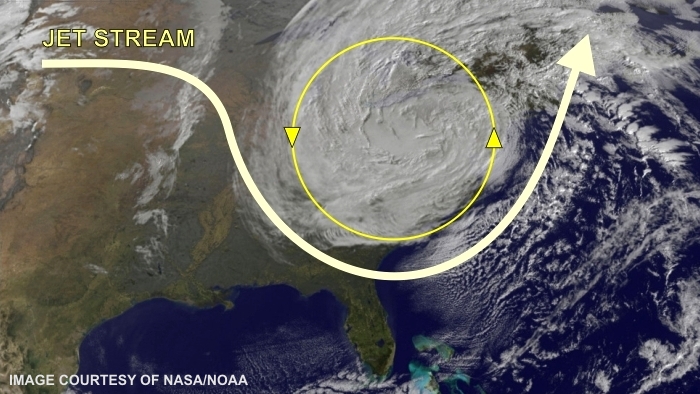 I’ve been getting a lot of questions about Hurricane Sandy. Readers are asking how and why it became a superstorm, and what the term “superstorm” really means. I’ll try to answer all those questions in this post. First, let me clarify what meteorologists mean when they talk about a superstorm. Another term often used is perfect storm.

Storms come in all sizes, small to large. But a superstorm isn’t just large. It’s the result of two or more major atmospheric events converging at the same time and place. In this case, those two events were Hurricane Sandy moving up the eastern coast of the US, and a trough (southward dip) in the jet stream arriving from the west.

For areas on the coast two more factors came into play. It was the time of high tide, and there were strong winds blowing from the northeast — what locals call a Nor’ easter (northeaster). These winds pushed a storm surge, adding to that tide. Seawater levels were 3-4 meters (10-13 feet) above normal. Coastal flooding was inevitable.

The NOAA satellite image above shows Sandy near its peak, on October 29, 2012. This was an enormous storm system. It measured over 1200 km (800 miles) in diameter, with winds topping 145 kph (90 mph). Further, its barometric pressure was 940 millibars. Around 1000 millibars is “normal,” with typical variations between the “highs” and “lows” you see on weather forecasts being 980-1050 millibars. The record for a “normal” weather system is 870 millibars, set by Typhoon Tip back in 1979. Inside a tornado, barometric pressure can drop even lower. Scientists measured 850 millibars for a tornado that hit South Dakota in 2003, and that’s the all-time record (so far).

Barometric pressure is one measure of the strength of a storm. The lower it drops, the more violent the weather, and the longer the storm tends to maintain itself. That’s where the jet stream (see above graphic) enters this scenario.

The jet stream is a fast-moving “river” of air that wraps all the way around the planet. It tends to meander north and south, rather than flow continuously in an eastward direction. Click on the thumbnail below to see a frame from an NOAA animation of the jet stream’s position during Hurricane Sandy. 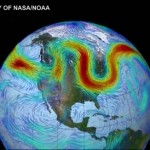 When the jet stream wrapped itself around Hurricane Sandy, it reinforced the storm’s counter-clockwise circulation and increased its wind speeds. The jet stream also brought colder air down from Canada into the mix, resulting in several feet of snow in the storm’s outlying western regions.

Had the jet stream trough arrived earlier or later (180° out of phase with Sandy’s rotation), it would have worked against Sandy and decreased the strength of its circulation. In fact, it was the approach of this low-pressure trough that caused the hurricane to veer west instead of the usual east. And that’s why this was such a “perfect” storm.

As this post goes to print, millions remain without electric power (the maximum outage was 7.5 million). Property damage is expected to total $30-50 billion. Low-lying areas near the coast are still flooded. And the storm claimed 106 lives, with many others reported as missing. So was this superstorm just a fluke, or a portent of things to come? For an answer to that question, see my July 9, 2012 Sky Lights.

Next Week in Sky Lights ⇒ How the Moon Changes

Q&A: How a Skydiver Broke the Sound Barrier
How the Moon Changes
HOME