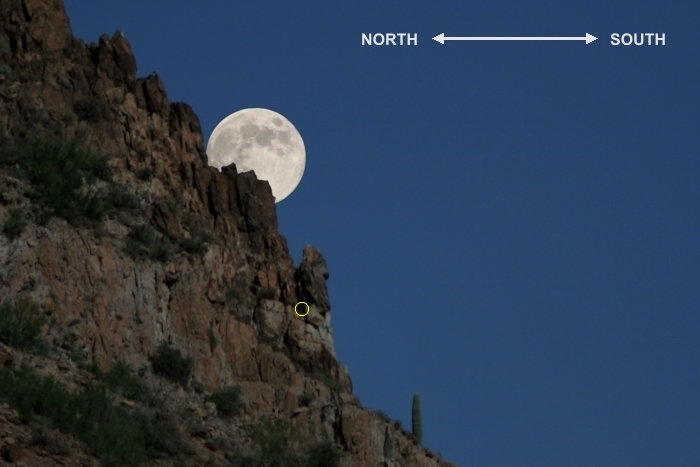 As promised in last week’s Sky Lights, here’s my photo of the August 30th Blue Moon rising. See … I told you it wouldn’t actually look blue. Of course, seen through a partly sunlit sky, the Moon often has a bluish tinge. That’s because the sky is blue and scatters blue light in all directions. Distant mountains look bluish for the same reason.

My astronomy software told me the Blue Moon would be rising behind Gavilan Peak, so I was hoping to catch the Moon silhouetted against that saguaro cactus. I knew it was going to be close. Unfortunately, as you can see, I missed it by about three moon-diameters. By the time I saw the glow of the impending moonrise, it was too late to move the camera and tripod. Had I set up about 100 yards farther south, I would have nailed it.

That large rock outcropping about one moon-diameter below the Moon has a “hole” in it where the rock leans up against the mountain. I marked it with a yellow circle. When the Moon rises behind that outcropping, you see a brief flash of light at the end of the “tunnel.” I’ve seen it happen only once. Of course, I didn’t have my camera ready.

And that brings up an interesting question: How much time does it take before the Moon exactly repeats any specific path through the sky? The answer is about 18.6 years. That’s the time it takes the Moon’s orbit to precess one cycle around the Earth. Not to say the Moon couldn’t rise at the same spot more frequently than that, but its path through the sky would be steeper or shallower. For a (nearly) exact repeat, you’ll need to wait 18.6 years.

I have to say “nearly” because, while the Moon is doing its thing, the Earth is going through its own cycle of precession. Earth’s precession cycle, however, is much more gradual — it takes 26,000 years to complete. Well, nearly.