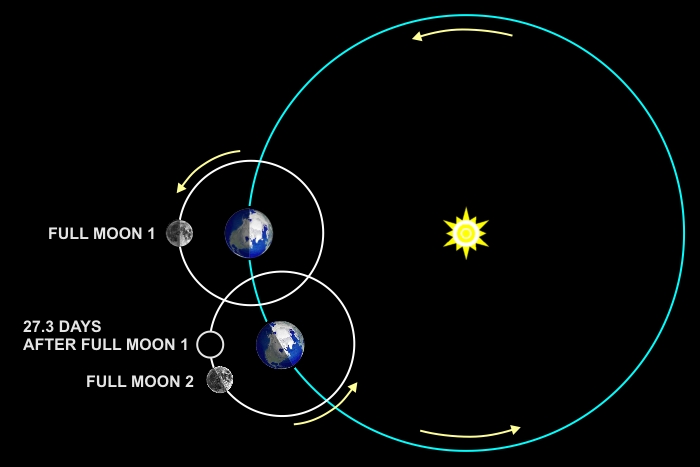 Question: I hear there’s going to be a Blue Moon this month. Will it really look blue? — RR & LH, New York, USA

The Blue Moon you’ve been hearing about refers to the second Full Moon in the same month. During most months, there’s only a single Full Moon. But every 2-3 years you can see two Full Moons in the same month. To understand why this happens, we’ll need to talk about the definition of month.

I often say the term should be moonth. That’s because the average length of calendar months is approximately equal to the time between Full Moons. Unfortunately, the following numbers have no common denominator:

What that means is, there’s no way to get a “perfect” calendar with, say, 30 days in every month, and 12 months in a year. So early astronomers designed the calendar as close to that ideal as possible. And that required months with differing numbers of days, leap years, and the occasional Blue Moon.

The graphic at top shows the orbits of Earth and Moon. There are two different ways to time orbits. Sidereal timing is with respect to distant stars, and is used for orbital calculations. It’s what we need to navigate spacecraft. The sidereal period of the Moon is 27.3 days. In that amount of time, the Moon makes one complete orbit of Earth.

Synodic timing is measured with respect to the Sun. The Moon’s synodic period is 29.5 days. In that amount of time, the Moon goes through a complete phase cycle. 29.5 days is the time between two Full Moons, and that’s why there will never be a Blue Moon in February, even in a leap year.

Note: A Full Moon can only happen when Sun—Earth—Moon are all in a line (with Earth in the middle).

Weather permitting, I intend to photograph that Blue Moon on August 31st. It’ll rise behind a nearby mountain, so if I’m lucky I might get a nice silhouette of a saguaro cactus in front of it. But remember … it won’t really appear blue. That’s a totally different phenomenon sometimes caused by fine smoke or dust particles in the air. If I get a good photo, I’ll run it next week in Sky Lights.