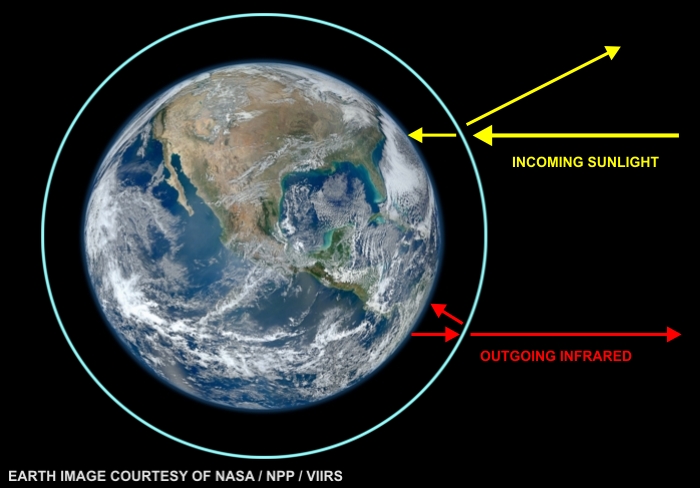 Question: So what’s your take on this whole “global warming” thing? From what I hear, even the scientists can’t agree on whether or not it’s really happening. — AG, Nashville, TN

Answer: The first thing you have to know is that scientists rarely agree 100% on anything. They’re always questioning, cross-checking, and verifying (or refuting) other scientists’ findings. That’s the nature of science.

That said, the second thing you have to believe is that, according to reputable sources, global warming is happening. Evidence is everywhere. From melting glaciers, to measurable ocean level rise, to more violent weather. And that includes the heat wave currently in progress over much of the United States. Back in the 70s, when I was studying environmental science, textbooks were already warning about the potential for these effects.

So I’m going to wax verbose here, and I ask that you indulge me for more than my usual blog length. But this is a topic of huge importance, and the way the popular media covers it leaves much to be desired. Further, this is a topic about which all citizens and voters need to have the facts. Knowledge is power.

Of all scientists working in the fields of climatology and meteorology, 97-98% believe Earth’s average temperature is rising, the climate is changing, and that it’s largely anthropogenic (caused by human activities). Interestingly, this change started about the same time as the Industrial Revolution. And the one activity most responsible for global warming is burning coal, oil, and natural gas. Again, these facts are from a reputable source.

What scientists do not agree on is how much of climate change is anthropogenic. Some argue variable solar brightness, slight changes in Earth’s orbit, deforestation (which is actually anthropogenic), or natural geologic cycles are more at play. However, those scientists are among the 2-3% alluded to in the preceding paragraph.

Scientists are also in disagreement about how fast the warming is happening, how it will affect local climates, how much the oceans will rise because of melting glaciers, and whether global warming can be reversed.

What they do agree on is there will be more violent weather. Weather is a function of the amount of energy (heat) in the atmosphere, and that level of energy is increasing. Violent weather can take many forms, from dust devils to tornadoes to hurricanes. High winds, lightning, and heavy downpours with flooding are other potential outcomes.

The physics of global warming is pretty basic. On the graphic above, incoming sunlight is represented by a yellow arrow. When it hits the atmosphere (exaggerated blue circle), some is reflected back into space, and some makes it through. What gets through is absorbed in the air, water, and ground, and is ultimately converted into heat.

The red arrows show what happens to that heat. Some of it is radiated back out into space as infrared electromagnetic waves, but some of it is reflected back by the atmosphere and retained by the global system. It’s that little red arrow coming back to Earth that’s causing all the problems.

How much CO2? By studying small bubbles of air trapped inside glacier cores, scientists can measure the amount of CO2 in the atmosphere over geologic times. Their results look pretty convincing to me. If you want to see a graph that correlates CO2 and average global temperature, go here.

And that’s why deforestation comes into play. Trees absorb a lot of CO2 from the atmosphere. By 2011, half the world’s original forests had been lost to agriculture, livestock farming, urban development, and logging. Over the last 15 years, the global rate of loss averaged 10 hectares/minute! [10 hectares ≈ 25 acres]

So yes, I believe global warming is happening. But making exact predictions is pretty tough. Some of the most powerful super-computers on the planet are dedicated to simulating climate, and some progress is being made. But simulating climate is not like simulating a ball rolling down an inclined plane. We’re still grappling with a lot of unknowns, like cloud cover, ocean currents, and geochemistry, all of which affect climate in ways not precisely understood.