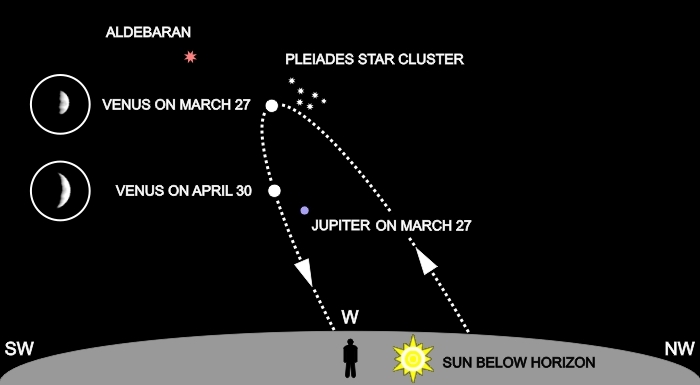 Question: There were these two bright objects right next to the Moon last week. I’m pretty sure one of them was Venus, but couldn’t find anything in your blog archives. My grandson asked me about them. Any ideas?  — LD, Tempe, AZ

Answer: Good eyes! That brightest object near the Moon was indeed Venus. But there’s much more to this story …

A complex celestial display is now visible in the western sky shortly after sunset. It centers around planet Venus, but also features Jupiter, the Pleiades Star Cluster, and Aldebaran, a red giant star.

First thing you need to understand is that Venus orbits the Sun inside Earth’s orbit. The orbit of Venus is shown by the dotted line. The size of its orbit is 72% that of Earth’s orbit. So from our perspective, that means we’ll never see Venus more than about 48° from the Sun. That’s the point where it “rounds the horn” and starts moving back closer to the Sun (visually, not physically). Copernicus had this all figured out, using basic geometry, around 500 years ago.

Venus reached that far point, called greatest elongation, on March 27th, when it was joined by a nice thin Crescent Moon. By now it’s moved a bit farther along in its orbit, traveling counter-clockwise as do all the major planets. If you check it out with binoculars, you should be able to make out its crescent shape. You’ll easily see that feature using a telescope. Venus goes through a phase cycle, just like our Moon, and for exactly the same reason.

When Venus is on the “back side” of its orbit, we see a fully lit circular disk (just like the Full Moon). But at greatest elongation, when the Sun-Venus-Earth angle is 90°, we see it at half phase. In the weeks to come, as it moves between Earth and the Sun, it will become increasingly more crescent-like since its lit side is facing more away from us. Remember: Planets don’t give off their own light, like stars. We only see them because they reflect sunlight.

As Venus approaches nearer to Earth, it also appears larger (see insets). It was this change in phase and size that convinced Galileo, back in 1610, that Venus (and the other planets) must orbit the Sun. That observation supported the heliocentric (Sun-centered) theory of Copernicus, and refuted the prevailing geocentric (Earth-centered) theory.

Venus will reach greatest brightness on April 30th, when the combination of apparent size and Sun angle combine to reflect the greatest amount of light. At that time, next to the Sun and Moon, it’ll be the brightest object in the sky.

Jupiter, orbiting the Sun outside Earth’s orbit, is not so constrained. It can be anywhere in the sky relative to the Sun, but just happens to be near Venus (visually, not physically) at this time. Look for it about halfway between Venus and the western horizon. It’s the second brightest object in that general area. Through binoculars, you should be able to see 3 or 4 of its largest moons as tiny pinpoints of light lined up on either or both sides of the planet.

Above Venus, and slightly to the south, is the red giant star Aldebaran, part of the constellation Taurus (aka the “Bull”). People often overlook star colors because they’re more like pastel shades. But in comparison to Venus and Jupiter (which are whitish) the reddish color of Aldebaran should be obvious.

Completing this celestial display is the Pleiades Star Cluster, which also looks nice in binoculars. Often mistaken for the Little Dipper, which is attached to Polaris (aka the North Star), the Pleiades is also part of the constellation Taurus. It does have a Dipper-like shape though, so I can understand the confusion. I’ve only shown its 6 brightest stars, but if you look at it with binoculars you’ll see dozens more.

This just in: Here’s a great photo of Venus and the Pleiades, captured on April 1st by Arizona astronomer Tom Polakis.

This grouping of objects will persist for a couple weeks, so haul out your binoculars (or telescope) and enjoy the show. You’ll get your best view between 7:15 and 8:00 pm.