You’ve probably seen a double rainbow. That’s when the primary bow is flanked by a concentric secondary bow. They’re fairly common at my location when it’s raining near sunset, since the horizon west of me is low enough to often let the Sun peek under the clouds. And as you probably know, it takes both Sun and rain to make a rainbow.

To see any rainbow, the Sun must be behind you, and the rain must be in front of you. To see a double rainbow you need dark sky where the rain is coming down. This improves contrast and allows you to see the fainter secondary bow, which is almost always there, but usually invisible. Light from the Sun enters the falling (or suspended) water droplets, reflects off the back of the droplet, and emerges heading back in a specific direction: ≈40°-42° from whence it came. As sunlight passes through the water, it’s separated into the colors of the spectrum via a process known as dispersion. If you want to learn more about the physics behind rainbows, go here.

The primary rainbow is 80°-84° wide. If you have the secondary bow as well, the total width is 100°-106°. So you won’t be able to capture it with a standard camera lens. For the shot above, I used a Zenitar K2 fish-eye lens, which provides a 180° diagonal field of view (cropped here). This was one of my first shots using this lens, and I hadn’t experimented enough to get the exposure quite right. Even after significant digital processing, the colors are still a bit washed out compared to what my eyes could perceive.

However, several interesting features are visible. First, note how the colors in the secondary bow are reversed compared to the primary bow. The thumbnail below shows this effect quite clearly. It’s the same rainbow as above, but photographed through a different lens. Click on it to enlarge. 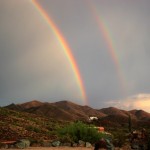 This secondary bow is caused by a second internal reflection sending light back toward the source at a 50°-53° angle, and that second reflection reverses the colors. Finally, note how the sky inside the primary bow is brighter than that outside the bow. This effect is due to sunlight being reflected and scattered by the front surface of the droplets.

If someone tells you they’ve seen a triple rainbow they’re probably mistaken … or lying. Tertiary (and even quaternary) rainbows are possible, but they appear near the Sun in the sky and are difficult to see given the Sun’s brightness. Primary and secondary rainbows, by comparison, are always opposite the Sun in the sky.

So next time you see a rainbow, consider that this beautiful optical phenomenon is the result of some very simple physics. And don’t let the physics get in the way of enjoying it. For me, understanding the physics behind rainbows makes them all the more enjoyable. It’s probably just a “geek” thing, but I can’t help it.