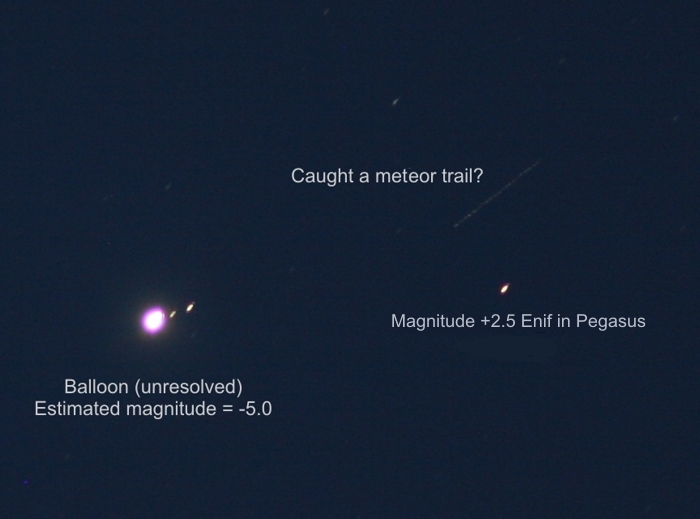 I do most of my photography with a Canon EOS 20D, an early model DSLR that provides 8 megapixel resolution. Got it way back in 2003, when my 1.1 megapixel Sony Mavica, which used floppy discs for memory [ ! ], bit the dust. Most of the time I use the standard 18-55 mm zoom lens, but some of my shots are through 100 mm or 200 mm Zuiko telephoto lenses. For photographs of larger objects, like rainbows, I use a Zenitar K2 180° fish-eye lens. And when I need serious magnification, I attach the camera to my Takahashi FS-128 telescope, a refractor design that gives very sharp images.

I’ve been doing astrophotography for some 20 years, so I have most of the procedures down cold. Still, Murphy’s Law occasionally rears its ugly head, and I get a lousy result like the one above. But I’m sharing it anyway for good reason. It’s the nature of science to learn from mistakes, and I’ll tell you exactly what I did wrong.

About this time last year the Arizona Astronomy Forum lit up with comments about a very bright weather balloon spotted over Phoenix. Unfortunately, it was cloudy here in New River, and I was unable to see it. Suddenly, what we astronomers call a sucker hole opened up in the clouds. I could now see the balloon! Shining at near magnitude -5 just after sunset, it was actually casting shadows. Magnitude -5 is about 25 times brighter than the brightest star, Sirius.

Now, the reason we call it a sucker hole is there’s no guarantee how long it’ll last. You can rush to get set up for a photo, but then find the hole has closed. I had time to grab my camera, but not enough time to change the lens or set up my tripod. Result: not surprisingly, a shaky image, blurred by camera movement while the shutter was open.

Still, the image does show how bright the balloon was compared to Enif, a nearby magnitude +2.5 star. And it also appears I caught the streak of a meteor in the image, since it isn’t exactly aligned with the camera movement. Then again, it might have been an airplane. Like I said, I’m not particularly thrilled with this photo.

If you’d like to see a far better image of a weather balloon, check out this great shot by Chris Schur of Payson, AZ. You can even see the instrumentation payload hanging from the balloon. Most of the weather balloons we see around here are launched from California or New Mexico, and they’re so bright they almost always trigger a spate of “UFO” reports.

So what have we learned here? If you’re serious about astronomy, atmospheric phenomena, or any other kind of nature photography, it pays to have your camera ready to go, mounted on a tripod if possible, with auxiliary lenses quickly accessible. The shot I blew could have been successful using a 200 mm telephoto lens and a tripod, so I still don’t have my own good photo of a weather balloon.