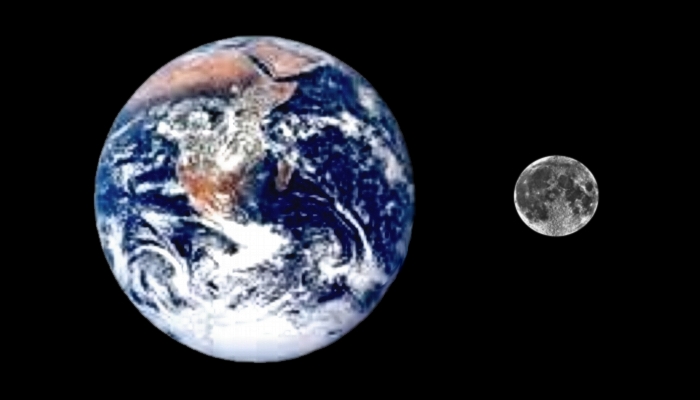 We’ve all been transfixed by a bright Full Moon hovering in the night sky. But if you were on the Moon, and looking back at a Full Earth, how would it compare?

As seen from the Moon, Earth would appear 3.7 times larger (in diameter) than the Moon as seen from Earth. The Earth has a diameter of 7926 miles; the Moon has a diameter of only 2159 miles. The graphic above is a simulation of those two views in a side-by-side comparison. What’s harder to simulate is the difference in brightness.

The fortunate few who have walked on the Moon, or orbited it, report a striking visual epiphany. Not only does the Earth appear larger than the Full Moon … it is significantly brighter. Although the Full Moon can appear very bright, the Moon’s surface is a relatively unreflective gray dust. The Earth has white clouds, oceans, and ice caps, all of which are better reflectors than gray dust. Note that the Moon and Earth do not give off their own light — they are reflecting sunlight.

It’s a matter of what’s called albedo, a measure of the reflectivity of celestial bodies. Earth’s average albedo is 0.367, which means it reflects 36.7% of the sunlight illuminating it. The Moon’s albedo is a measly 0.12.  That means, square mile for square mile, Earth is 3 times brighter than the Moon. Those who have walked on the Moon say the “earthshine” is so bright that it’s almost like daytime.

When the angles are right, Earth’s oceans can act as a mirror, similar to those decorative spherical globes used in gardens to reflect a 180° image of the surroundings. Astronaut Douglas Wheelock, on the International Space Station (ISS), captured this image of the Sun reflecting off the Mediterranean Sea near the island of Cyprus. Click on the thumbnail image for a larger view. 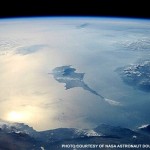 You can clearly see the reflection of the Sun as a bright point of light on the water’s surface. So compared to the Moon, the Earth appears bigger, brighter, and more colorful.

I’ve been talking about the appearance of a “Full Earth” in this post. But I should point out that, just like the Moon, Earth also goes through a cycle of phases. As seen from the Moon, over a period of one month, you would see a Full Earth, Gibbous Earth, Quarter Earth, Crescent Earth, and New Earth. The image below shows a (nearly) Quarter Earth. It’s that classic “Earthrise” photo taken by Apollo 8 astronaut Bill Anders. Apollo 8 flew around the Moon, without landing, on Christmas Eve in 1968. Again, click on the image to enlarge it. 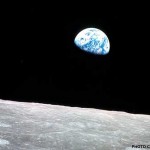 Since we’re talking about how the Earth would appear as seen from the Moon, I should note one final point. The Moon always keeps the same side (called the Near Side) facing Earth as it orbits around us. It’s a gravitational effect called tidal locking. So if you were on the Moon, depending on your location, Earth would always appear at the same place in the sky. If you were at the middle of the Near Side, Earth would be directly overhead. If you were on the lunar Far Side, you’d never see the Earth. And if you were right on the border between the Near and Far Sides, Earth would be “frozen” in a half-risen position on the horizon.

I have no doubt that, when the Moon has permanent colonies, Earth-gazing will be a very popular activity.