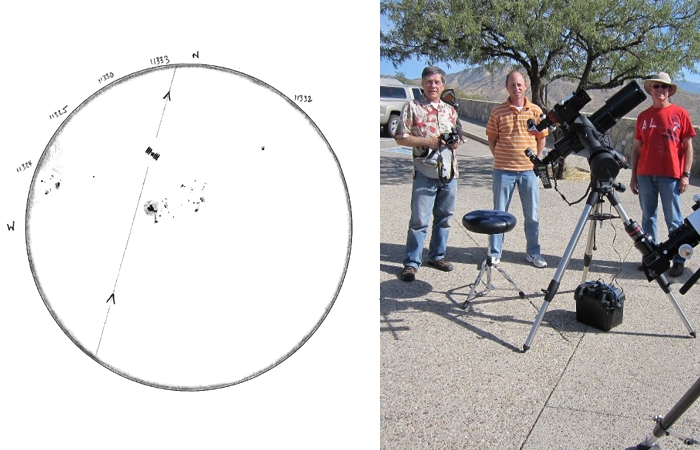 There persists, in this age of digital imaging, an avid subset of astronomy observers who prefer to sketch, rather than photograph, their targets. There are those who do either or both. The sketch shows the International Space Station (ISS) transiting (passing over) the face of the Sun. It was drawn by Dr. Alan Strauss, Tucson resident, observatory owner, and amateur astronomer (orange striped shirt in the middle). He notes how the overall shape of the ISS was clearly visible, right down to the solar arrays used for generating electricity. The other objects in the sketch are sunspot groups.

I asked him the question: Why, in this digital age, is anyone still doing hand sketches in astronomy? I mean, that was the only thing they had for recording images before photography arrived in 1827. But what could be the motivation these days? Alan’s answer was the following:

Speaking personally, I started making sketches as a way to spend more time observing an object, and as a means to becoming a better observer.  While certainly the time spent sketching achieves that purpose, I have found that I enjoy making the sketches, as above all, they are artistic expressions of my perceptions at the eyepiece.

I’ve asked that same question to other amateurs who record sketches. Answers have included “The eye-brain system sees more than a camera.” and “It’s just a zen-like experience.” Few are trained as artists, but as observers, all have a keen sense of detail. You can see that in their drawings.

Most use pencil or charcoal on white paper, producing a “negative” of what they actually see. Some use white on black paper. A few use pastel colors to better capture the subtle hues of the heavens. You can see more of Alan’s outstanding work on his website at: http://lostpleiadobservatory.blogspot.com/

I’d be remiss if I didn’t comment on the actual event Alan sketched, as it somewhat relates to last week’s topic.  The ISS actually transits the face of the Sun (and Moon) fairly often. It’s not that rare an event, but you really need to be in exactly the right location. The difference between a dead-center transit and a miss can be less than a few miles here on the ground. And with the ISS moving at about 5 miles per second, you can literally blink and miss the transit. Even a dead-center, full diameter, transit is over in a couple seconds.

Still, many have actually captured these transits on photos and videos. You can see a nice collection on Ed Morana’s website at: http://pictures.ed-morana.com/ISSTransits/. And check out this incredible image of a lunar ISS transit by Arizona amateur Tom Polakis. His website is on my Links page.

Spooky Things in the Sky
Light Pollution of a New Kind