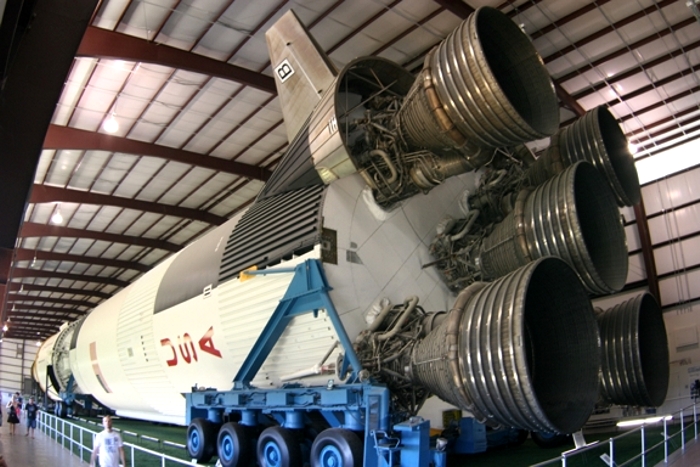 Question: So what do you think about that new movie Apollo 18, where they launch a secret mission to the Moon after the Moon program is supposedly canceled? They claim it’s based on top-secret videos that were somehow leaked from NASA archives. You think there’s any truth behind it? — NA, Indian Hill, Ohio

[Note: If you intend to see this movie, there is no plot spoiler in my response.]

Answer: Well, I don’t normally do movie reviews in Sky Lights. And I haven’t seen Apollo 18, nor do I intend to (based on the reviews). That said, I recently visited the Houston Space Center and got my second opportunity to see a Saturn V Moon rocket in person. Photo above. Fish-eye lens required. And my back was against the corner of the hanger. Seeing the Moon rocket again only reinforced my opinion about Apollo 18. Allow me to elaborate.

First, NASA has affirmed that Apollo 18 is pure fiction. The Agency rejects the claim that Apollo 18 is based on video footage leaked from their “secret archives.” There were only three unused Saturn V rockets, and all are accounted for. None were launched in secret.

Second, if you ever saw one of these Saturn V rockets, you’d wonder how it could ever be launched secretly. They are huge, noisy, and leave quite a trail in the sky (especially at night). Check out this video of a Saturn V launch. If you were anywhere in Florida you’d have seen it, and probably heard it.

The Saturn V first stage was powered by five F-1 engines, each capable of 1,500,000 pounds of thrust, and operating at 190 million horsepower! To give you a better feel for the size of these engines, click on the thumbnail image below. That’s my wife Sandi standing next to it to provide a sense of scale. 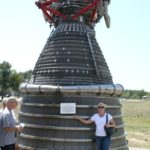 Finally, there were many obvious inconsistencies in the movie plot. I won’t play the role of “spoiler” here, as I know many people will still want to see Apollo 18, but suffice it to say the vast majority of online reviews can be summarized as “great idea, poorly executed, save your money.” The positive comments focused on how realistic the “secret video footage” looked, as it mimicked the analog video quality available in the early 70s.

I’ve never been a big fan of conspiracy theories. See my post about the Great Moon Hoax. Apollo 18 bills itself (in the on-screen credits) as the story of a conspiracy theory, and it probably will catalyze some rumors, but even the studio admits it’s a “work of fiction” and not a “docudrama.”