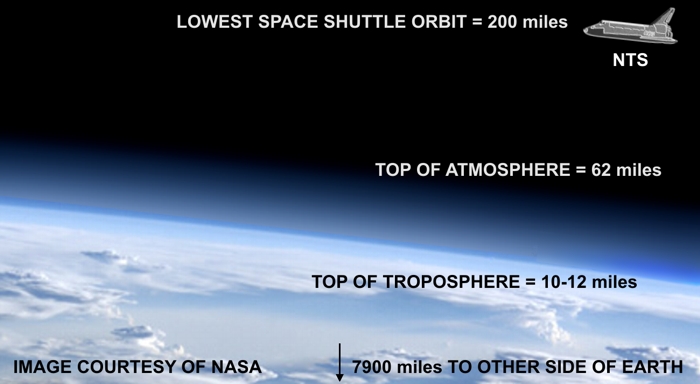 Answer: Not as far as you probably think. In fact, it’s less than the distance between Prescott and Phoenix.

But before we get into that, let’s clarify a few things. Where the Earth’s atmosphere ends, and space starts, is not a sharp division. It’s a gradual transition. NASA, and other space-faring organizations, decided on an arbitrary definition of “100 km” (62 miles) for the distance from Earth to space.

The reasoning behind this definition is that 100 km is the altitude at which aeronautics is replaced by astronautics. Simply put, at 100 km altitude, there’s just not enough air for wings to provide lift. Instead, rocket engines are required for propulsion and maneuvering.

Most weather takes place in the bottom 10-12 miles of the atmosphere, a layer called the troposphere. Commercial jet airliners seldom fly higher than 7 miles. And that’s about the same as the summit of Mt. Everest.

The image shows how close you really are to space. When you consider that Earth is a 7900 mile diameter sphere, that layer of air between ground and space looks pretty slim. At the scale of this image, the entire Earth would be a sphere about 10 feet in diameter.

The air thins gradually as you climb in altitude, but never gets to a perfect vacuum. Even at the altitude the Space Shuttle orbits, there’s still some air drag. At 100 km altitude, that air drag will cause your orbit to decay in only a few hours. So the minimum altitude for most spacecraft is about 200 miles. To orbit lower, you’ll need to fire up the engines.

How the Size of a Star Relates to Brightness
Q&A: Canines Howling at the Moon
HOME