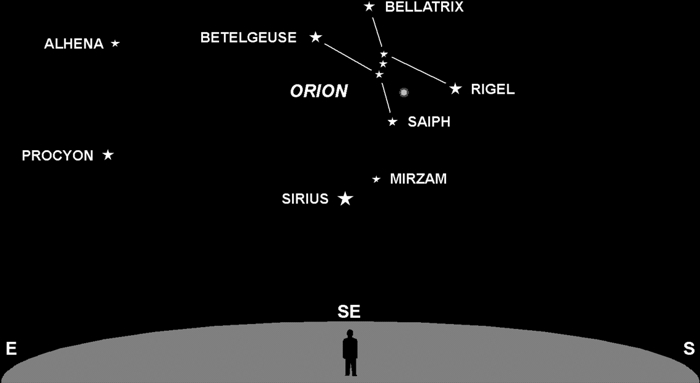 Sirius is the brightest star in our sky. In February it shines low in the southeast. This star is a blue giant; it’s twice as large and twice as hot as our own Sun. Further contributing to its brilliant appearance, Sirius is a mere 9 light years distant — that’s about 54 trillion miles, but still in the neighborhood (astronomically speaking).

Look at Sirius continuously for 10-20 seconds and you’ll see it sparkle with every color in the rainbow. The effect is tremendously enhanced with even a little magnification, so if you have binoculars check it out. Some say it looks like a July 4th sparkler. Others compare it to a spinning diamond.

What’s happening here is the refraction of light. Sirius’ true color is blue-white. All the other colors you see are produced as this blue-white light enters Earth’s atmosphere. The light separates into a spectrum, just like when it enters a prism. This spectrum is jostled by turbulence in the air.  What finally reaches your eye is a twinkling of colors. Watch and you’ll see them all:  Red, Orange, Yellow, Green, Blue, Indigo and Violet. Remember ROY G. BIV?

All stars twinkle, but the effect is greatest when a star is bright and low in the sky. Having to look in a direction over hot desert sand, or a subdivision with lots of concrete, also enhances the effect. Of course, this isn’t good for astronomers who want clear images, but that doesn’t take away from the beauty of the phenomenon.

The Big Fish
Q&A: The Shape of Lightning Bolts

Discussion of “Far Out February Fireworks”