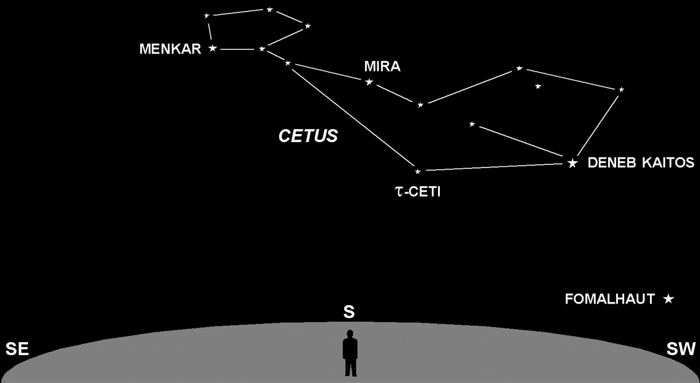 Thar’ she blows! Cetus (The Whale) is at its highest point of the year, providing your best chance to see this large but faint constellation. As always, clear, dark, Moonless nights are your best bet.

Yellow-orange Deneb Kaitos, shining at magnitude +2.0, is the brightest star in Cetus. The fainter, magnitude +3.6 star at the belly of the Whale is named τ-Ceti (Tau Ceti). It is the third closest star to Earth (not counting our Sun) visible from north of the equator. Tau Ceti is only about 12 light years distant — a stone’s throw on the galactic scale.

It’s a star very much like our own Sun in color, size, and temperature, but it’s twice as old (10 billion years). At the time of this writing, it is not known for certain whether this star has any planets. Tau-Ceti has a recently-evolved mythology related to UFOs. Since the star is so much like our own Sun, and since any civilizations there could be twice as old (and hence advanced) as ours, many have suggested it is the “home base” of aliens who are visiting Earth.

Because it is so close, it was scanned by radio telescopes in the 1960’s. Unfortunately, no radio signals or other signs of intelligence were detected. The search for ET continues, but he’s probably not on Tau-Ceti.