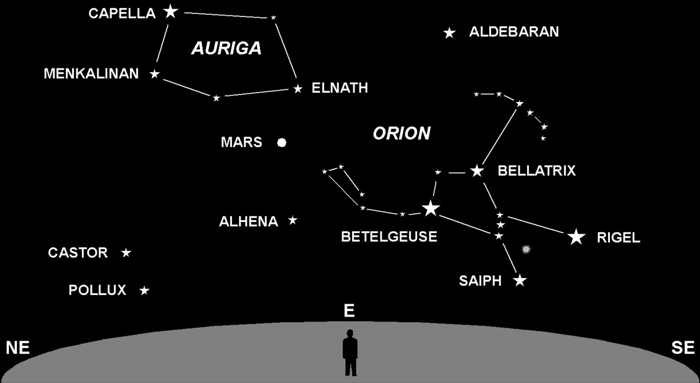 Planet Mars will shine like a red beacon in the east for most of this month. It reached its point of closest approach (55 million miles this time around) in late December, but is still well placed for telescopic viewing. And you will need a good telescope to see much of anything. Even at its closest, Mars is a tiny and distant world.

At magnifications near 200x, you should be able to make out some surface features, like the dark lava plains and perhaps a hint of the polar cap. But you’ll need clear skies and steady air to pick out these details. To the eye, its “reddish” color is unmistakable. Compare it to the nearby “bluish” stars Elnath and Bellatrix for contrast.

Compare it also to the nearby “reddish” stars Aldebaran and Betelgeuse and you’ll notice something else — Mars doesn’t “twinkle” like the stars do, but shines with a steadier light, as do all planets. You probably wouldn’t notice it unless you looked for it, but the effect is definitely visible to the unaided eye.

The stars are so much more distant than the planets that their light comes from a single point in the sky. As this ray of light passes through Earth’s atmosphere, it gets jostled by the uneven air creating a “twinkling” effect. Planets, by comparison, are discs (not points), and emit a “wider beam” of light that less often misses your eyes.