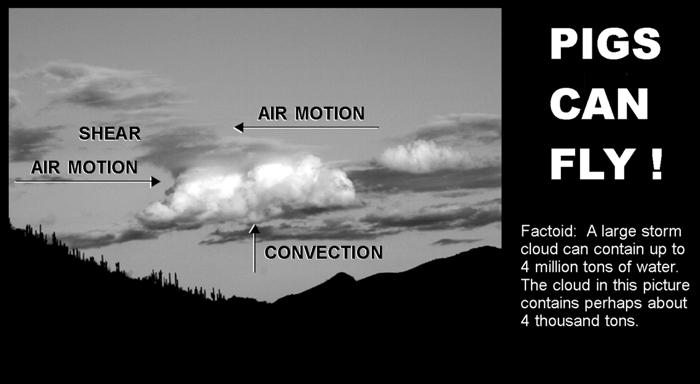 Question: Yesterday I saw this cloud that looked just like a chicken. How does that happen? — EF, down on the Farm, KY

Answer: We’ve all seen clouds that looked like familiar objects. Sometimes the resemblance can be striking. Fact is, the shape of a cloud is strongly dependent on several random processes.

Clouds are vast collections of water droplets, most around 100-1000 µm (micrometers) in size. That’s about 1/2 the thickness of a dime, or 1/50 of an inch. When temperature, pressure, and humidity levels are right, water vapor in the atmosphere will condense into liquid form, usually on small particles of dust or smog (or silver iodide, which is used for cloud seeding). Thus is a cloud born.

In its liquid form, H2O scatters and reflects light easily. That’s why clouds are visible. In vapor form, H2O is pretty much invisible. Once formed, a cloud’s shape will evolve under the influence of moving air, and air can move in a lot of different ways. Two ways that have a major impact in sculpting cloud shapes are shear and convection.

Shear is created when a layer of air moves in a direction other than that of an adjacent layer (see photo). Convection is when warm air rises through cooler air, often accompanied by turbulence. The result is unpredictable, and the shapes produced purely random. Sooner or later, one of these random patterns will look like something familiar. It’s a well-known tendency of the human eye-brain system to find patterns in noise, like the “Man in the Moon” or the “Face on Mars.” I shot the above photo of a “flying pig” just last month.

Discussion of “Q&A: Pigs Can Fly!”