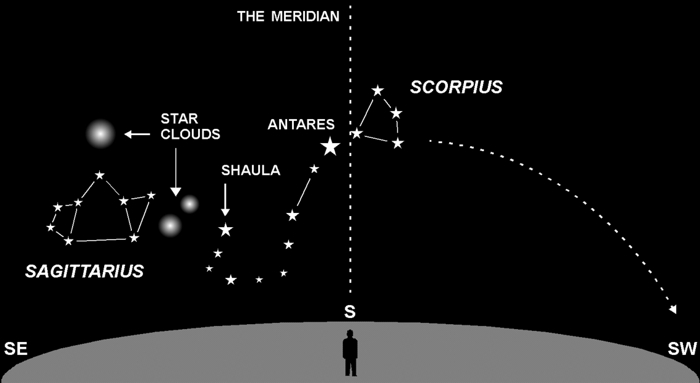 There are two easily recognized constellations visible in the south. Scorpius, one of the few constellations that actually looks like its namesake, leads the show. One hardly needs to connect the stars with lines to see the scorpion’s shape. The red giant star Antares marks its heart, and dimmer Shaula its  stinger.

We note Scorpius is “on the meridian” since that’s its point of highest elevation and best visibility. The meridian is an imaginary line running from north to south across the dome of the sky. If you follow Scorpius into the later hours of the night, you’ll see it move downward along the dotted path. The scorpion will set in the southwest around 5 am.

Sagittarius, by contrast, looks nothing like its namesake (The Archer). Most of the stars in this constellation are too faint or too low to be easily seen. What you can see is “The Teapot,” an asterism, or subset of its brighter stars, some from the archer’s bow, others from his body.

If you have access to binoculars, check out the area just above the teapot spout. To the naked eye, on a dark night, it looks like puffs of steam. With only moderate magnification the “steam” will be seen as several rich clusters of multicolored stars.

Q&A: The Sun is a Star
Q&A: Heat Lightning
HOME