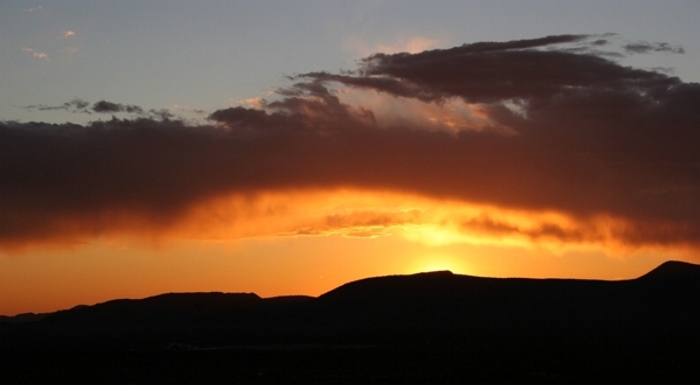 Question: I was enjoying a nice sunset the other night, and I swear it looked like there were two Suns, one right above the other, Must have been some kind of illusion, right? — JH, San Francsico, CA

Answer: What you most likely saw is called a false Sun. Sometimes, when clouds containing ice crystals align just right, the Sun can create an image of itself above where it’s actually located. The photo above was captured in late February of this year, from New River, AZ.

The Sun had just set over the mountains to my west. There are clouds in the sky just above this point. They contain randomly oriented ice crystals that act as a diffuse mirror. You get a reflection of the Sun (albeit smeared out) that almost makes it look like there are two Suns setting.

This phenomenon is most often seen in the cooler months (October – March), when ice crystals are easily formed. The false Sun is a close cousin of the Sun pillar (see my March 1, 2007 Sky Lights).

If you look for this effect at sunset you will, sooner or later, be rewarded with one of these spectacular “double sunsets.” The false Sun can be quite bright under ideal conditions, especially so with dark clouds in the background. The false Sun in the photo above was one of the brightest I’ve ever seen. So I guess I’ve contradicted my own slogan — this “night light” was a mere 15 miles away.