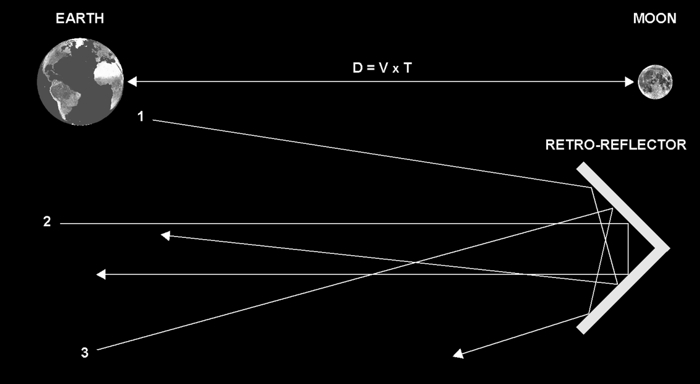 Question: I’ve been hearing rumors about the Moon landings being a hoax, perpetrated by the US government to “beat” the Soviets in the Space Race of the 60s. What’s your take on this? — RH, Roswell, NM

Answer: I have no doubt we landed on the Moon, but it’s hard to claim absolute scientific proof unless you were there personally. Lacking that, I think I’ve got the next best thing.

In the 60s and 70s, three U.S. Moon missions (Apollo 11, 14, & 15), all manned, and two robotic Soviet missions (Luna 17 & 21) left retro-reflectors on the lunar surface. These devices consist of mirrors connected at 90° angles. This configuration has the remarkable optical property of reflecting any incident light ray directly back in the direction from whence it came. If you shoot pool, you know the effect. Study the three rays in the diagram. When they hit the mirror, the law of reflection says the angle of reflection will equal the angle of incidence (θr = θi).  From that equation, basic geometry can prove the incoming and outgoing rays must be parallel.

In the early 1970’s, McDonald Observatory in Texas conducted experiments using the Apollo 11 retro-reflector. A laser was fired at the Moon, and its reflected beam was detected and timed. Multiplying the speed of light by half that time gave the distance to the Moon. The speed of light is known with such high precision (299,792,458 m/s) that the distance to the Moon can be measured to an accuracy of about 1 cm.

Back in the 1980’s I visited McDonald and saw this done. The laser beam took 2.564456 seconds to get to the Moon and back. Someone left a mirror at Tranquility Base. Sure, I suppose one could argue that it was delivered by a US robotic mission, but at some point you have to trust the cumulative evidence (Moon rocks, photos, Apollo astronaut testimony). And really … a hoax that huge could not avoid leaks.

Discussion of “Q&A: The Great Moon Hoax (Not)”