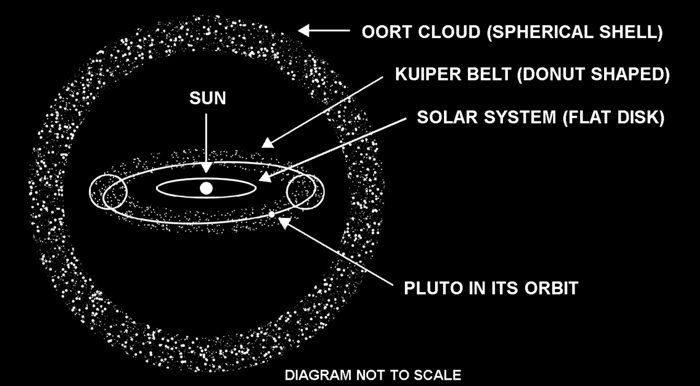 Question: I heard that Pluto lost its official status as a “planet” just because it lies in the Kuiper Belt. What’s up with that, and what the heck is the Kuiper belt? — CT, Las Cruces, NM

Answer: Good question. Astronomers are still debating exactly what Pluto should be called. But there’s no doubt Pluto orbits in the Kuiper Belt. The Belt was named for astronomer Gerard Kuiper who, in 1951, proposed it might be the source of short period comets.

You can visualize the Solar System from the Sun out to Neptune as a flat disk. Beyond that it gets messy. First comes the Kuiper belt, a donut-shaped swarm of small bodies that orbit the Sun with a variety of orbital tilts. Pluto is among these bodies, with an orbital tilt of about 17°. The major planets’ orbital tilts are all < 7°.

Beyond that is a spherical swarm of small bodies (shown in cross-section) known as the Oort Cloud. Beyond that is the realm of interstellar space. Pretty much nothing for trillions of miles.

The International Astronomical Union (IAU) has decided that Pluto is more like a Kuiper Belt object than a classical planet, so it belongs in a new category. Henceforth, it will be called a dwarf  planet instead. Classification is important to scientists. It lets them group things with similar properties. Things with similar properties often have similar origins, and, because of its location, it seems Pluto was created by a different process than that which formed the other eight (real) planets in our Solar System.