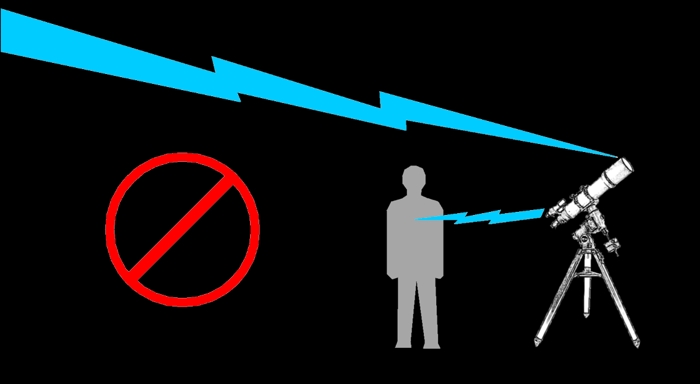 Question: Seems like every time I go out to look for the things you write about, the sky is cloudy, especially now during our monsoon season. I have seen some pretty nice lightning though. Is that cool or what? -BF, Philadelphia, PA

Answer: I’m not sure you’re actually asking a question here, but it does remind me to remind my readers of the hazard lightning presents to those involved with the hobby of astronomy. Consider this Navajo war chant:

Hi! ni! ya! Behold the man of flint, that’s me! Four lightnings zigzag from me, strike and return.

They didn’t get the physics quite right, but their respect for the power of lightning is obvious. Lightning is indeed a hazard to astronomers, who set up their (usually) metal telescopes in wide open areas, preferably at higher elevations. By comparison, clouds are just a nuisance, though the two often occur together. August, at least in Arizona, is monsoon season. It typically lasts until mid-September. Not much astronomy gets done during monsoons

Whatever part of the world you live in, there’s going to be good and bad seasons for star gazing. Not like just watching the clouds can’t be enjoyable, especially if there’s a good lightning display. But being outside next to a large metal telescope is definitely not a good idea during an electrical storm. You risk significant damage to your equipment, not to mention bodily injury or death if the lightning jumps from the telescope to you.

So on those unfortunate nights when the sky is clouded over, consider reading an astronomy book, or browsing the web to learn more about this hobby. If there’s a lightning display, best to stay inside (and off the internet) unless your home has the protection of a lighting rod system. Only then should you venture out onto your porch to view this spectacular natural phenomenon. Even with lightning rods, there’s still a risk unless the lightning is very distant. Sometimes “sky lights” can be both beautiful and dangerous.