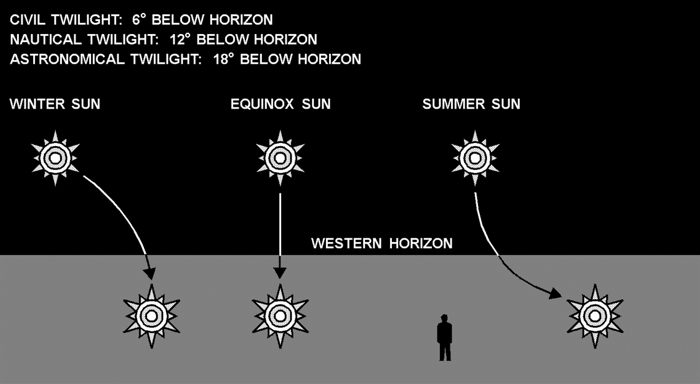 Question: I know the daylight lasts longer in the summer, obviously, but twilight also seems to last longer. Is there some connection to these observations? — CD, Bucharest, Romania

Answer: As we say in the business, “good eyes.” You have noticed a very real effect that can be traced to the path taken by the Sun through the sky. But first, let’s clarify exactly what we mean by twilight.

Twilight begins when the sun has totally set, and no part of it is visible. That’s the easy part. Twilight ends when the Sun is far enough below the horizon that the sky is suitably dark for your purposes (hence the three definitions above).

Now look at the path taken by the Sun during the three seasons shown. Because of the Earth’s 23½° rotational tilt to the plane of its orbit, this path appears curved, and it curves differently in each season. As a result, the time it takes the Sun to get, say, 18° below the horizon will also differ. The exact numbers depend on your latitude, but here’s the numbers for Arizona :

The seasonal difference here is 21 minutes. Note how, in the Spring and Fall, when the Sun’s path carries it nearly straight down, twilight is the shortest. Of course, your results may vary. At the poles, twilight can last all day.

Discussion of “Q&A: Sunset and Twilight”