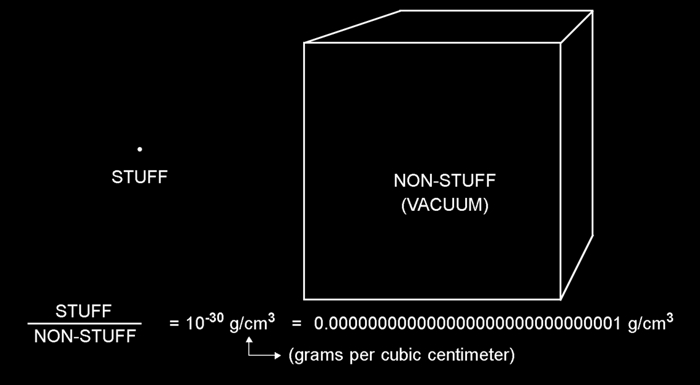 Question: So why do they call it “space?” — DA, Cambridge, England

Answer: They call it “space” because it’s so empty. The amount of stuff in it is almost negligible when compared to the amount of  non-stuff  (pure vacuum).

By “stuff,” I mean the normal type of matter we think of as making up stars and planets and comets and asteroids. But even though the Earth seems large, it is minuscule in comparison to the distances between it and other  “stuff.” One of the cosmic parameters astronomers are attempting to measure is the average density of matter in space. Density is the mass to volume ratio, that is,

Because the distances between objects like the Earth and Moon and Sun are so large, this works out to be a very tiny number — so tiny it cannot be written without using a lot of zeros. Look at the calculated result above.

To help clarify this density concept, ponder the difference between a rock and a sponge. Your average rock has a density of about 5 g/cm3; a sponge around 0.5 g/cm3. The lower value for sponge is due to all the holes it contains. In fact, your average sponge contains a lot more “hole” than sponge. Space is like that, but very much more so. And that’s why they call it “space.”

Saturn and Mars in Gemini
The Not-So-Mighty Hercules
HOME