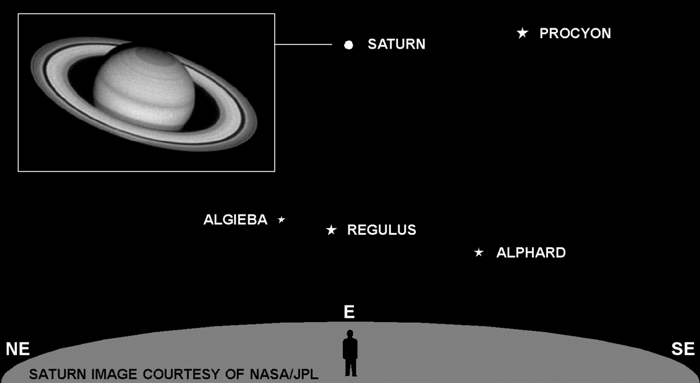 Saturn, the spectacular ringed planet, was at closest approach to Earth January 27th, but it’s still a great sight and more conveniently positioned for casual observers. Look for it high in the east an hour after sunset. It’s all alone in a relatively empty patch of sky, just left of bright Procyon. Actually, it’s in the constellation Cancer, but this is such a faint constellation I opted not to show it.

The majestic ring system is now tilted about 20% — a bit less than the 27% maximum shown above. The tilt cycles from zero to maximum to zero over a period of 13 to 16 years (average = 14.7). When the tilt is zero, as it was in 1996 and will be in 2009, the rings virtually disappear from view. The rings are only about a half-mile thick, and Saturn never gets closer than about 800 million miles. At that great distance, viewed edge-on, the rings appear extremely thin.

Astronomers believe the rings are the remains of an icy moon that was ripped apart by Saturn’s gravity. They consist of mainly ice particles, most smaller than a snowman’s base, as well as dust. The clearly visible gap in the rings, known as the Cassini Division, is around 3000 miles wide. You can see the rings using only binoculars, but to see the gap you’ll need a telescope.