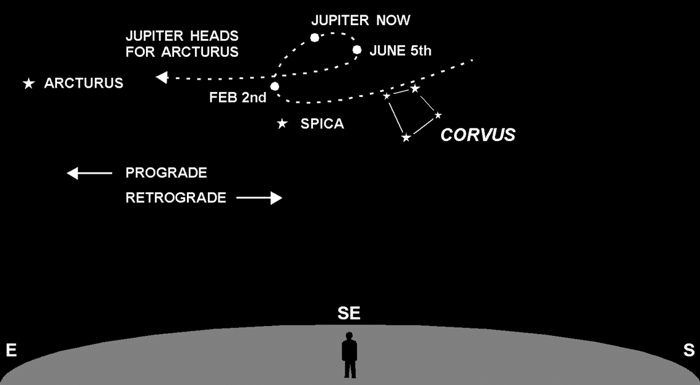 Question: I read somewhere that Jupiter is now in “retrograde. “What does that mean, and why do the astrologers seem so concerned? — CC, somewhere in Humbolt County, CA

Answer: Jupiter has been in retrograde since February 2nd, and will be until June 5th, after which it will resume its usual motion. Here’s what that means.

The constellations of stars are fixed in their positions with respect to each other, e.g., the Big Dipper’s bowl stars always point at Polaris, and Orion is always just east of Taurus. The planets, on the other hand, drift around the sky passing stars and constellations. Our word “planet” comes from the Greek word planetes meaning “wanderer.”

This drifting motion follows a predictable pattern. Most of the time the planets are drifting to the east with respect to the stars. This is called prograde motion. But once every year they reverse direction and drift to the west. This is what we call retrograde motion.

It’s important to realize that these planets don’t actually reverse their motion in space. That would take a huge force and could never happen. The retrograde motion is an illusion caused by Earth passing them by in its orbit around the Sun. It’s like passing a car on the road — you’re both going in the same direction, but relative to the passer, the other car seems to be dropping backwards.

Why do the astrologers care? Their mythology says that when planets go into retrograde, weird or significant things can happen here on Earth. Trust me … don’t lose any sleep over it.